Russia, who came in second, booed by crowd who were reminded to ‘build bridges’ 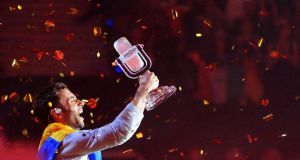 Sweden won the 2015 Eurovision Song Contest on Saturday with Heroes by Måns Zelmerlöw.

The Swedish song won with 365 points, giving it a comfortable margin over second place Russia, which finished with 303 points.

Early on in the voting period, however – one of the most nail-biting in recent memory – it seemed as if Russia’s Polina Gagarina might bring home top honours, but Zelmerlöw took over the lead halfway through the voting and remained there until all 40 countries had voted.

While it’s unlikely he had Ireland directly in mind, Zelmerlöw’s statement as he collected the Eurovision trophy – “no matter who we love, we are all heroes” – resonates with the results of the Irish marriage equality referendum.

Ireland has further stakes in this victory, in that Sweden has now won Eurovision six times, only one fewer than Ireland’s record-breaking seven gongs.

Early in the voting period, there was loud booing in the hall when Russia earned high votes, but an admonition from one of the hosts that the theme of this year’s Eurovision is building bridges largely quieted this - though anti-Russian booing flared up intermittently until the voting was finished.

First-time competitors Australia showed themselves well with a fifth-place finish at 196 points.

Two countries finished with nul points – Germany and host country Austria. The contest clocked in at 3 hours 50 minutes long - one of the longest Eurovision finals in recent memory.