Philly McMahon of Thisispopbaby will be creative director for performance

Singer-songwriter Lesley Roy has been chosen to represent Ireland in the 2020 Eurovision in the Netherlands. Video: Eurovision 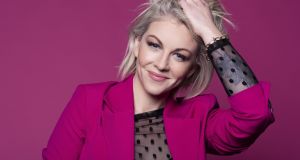 Singer-songwriter Lesley Roy has been chosen to represent Ireland in the 2020 Eurovision in the Netherlands.

Singer-songwriter Lesley Roy has been chosen to represent Ireland in the 2020 Eurovision in the Netherlands. The 33-year-old Balbriggan, Co Dublin, native will sing Story of My Life, which she wrote.

With the staging of the songs becoming increasingly important in recent years, Philly McMahon, a founder of the award-winning  Thisispopbaby theatre company, will be creative director for this year’s Irish performance, while Philip Connaughton will devise the choreography.

“I had written this song - Story of My Life - that I was obsessed with and could never figure out what I wanted to do with it,” Roy said. “So it was a combination of wanting to share this song that’s also timed with where we are in society right now.

“I had been thinking about potentially submitting a song for a few years, but this year finally felt like the right time.

“I feel that for a while now more and more people are speaking up and telling their own story, being vulnerable sharing their own ups and downs and the story of their own life,” she said.

Roy divides her time between New York City and Ireland. She released an album, Unbeautiful, in 2008, which was produced by Max Martin, who has worked with Katy Perry, Maroon 5 and Taylor Swift among many artists. Since its release, she has written songs for other people including Queen’s Adam Lambert and Miss Montreal.

McMahon said he was “answering Ireland’s call” in becoming involved in Eurovision. He described Roy’s number as a “real banger” which could bring a change of fortune for Ireland in the Eurovision.

“I’ve been talking to RTE for a number of years about getting involved in Eurovision somehow and for many reasons over the years, it hasn’t happened,” he said. “RTE came to me with the song and I thought that I can do something with this song. I think Lesley is an incredible talent. I think she is fresh and cool. In terms of the temperature of what Ireland sends to the Eurovision, this is completely different.”

He said RTE has not properly understood how the contest has changed over the last two decades since Ireland last won.

“RTE needs a longer term strategy about how we develop pop talent in Ireland. We can do ballads and guitars very well, but not in terms of high energy pop. Nobody goes to Eurovision thinking they have a bad song. Every year people think that this can be our year.

“In the last decade it is a credible platform for incredible talent. Ireland has a chance to say that we are back in the competition, we get it and we are ready to compete with this song.”

Roy will be the third gay performer to represent Ireland at the Eurovision after Brian Kennedy (2006) and Ryan Dolan (2013). McMahon said the fact that Roy is LGBT was something that forged a personal connection with the artist. “It was a good hook for me personally,” he said.

The song will have its first airplay on Thursday morning on 2fm Breakfast with Doireann and Eoghan between 6am and 9am. Roy will give her debut TV performance of the entry on The Late Late Show on RTÉ One on Friday.