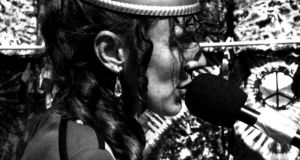 The Space Lady: the definition of street music

Never judge a book by the cover, somebody once said, and we all just went along with it. There’d be a gaping hole in my record collection if I hadn’t acted on impulse every time a cover struck me as being too enticing to ignore or leave behind. Many, many strange and beautiful covers adorn the stacks on my shelf. It’s part of what makes searching for records something of a thrill.

But record shops are no longer the domain of the thrill-seeker. The internet has put the kibosh on that particular kick. The impact of the image has diminished along with the concentration given to the music itself. When something else is just a click away, restlessness invades the whole process of discovering new music.

I had never heard of The Space Lady before I saw a strangely arresting black and white picture of Susan Schneider busking on the streets of San Francisco wearing a winged helmet with a bulb on top. She reminded me of Moondog, the New York street musician and sound artist, possibly due to the helmet, something he was also fond of sporting.

But their worlds were far more closely linked than that.

They were both blessed with the kind of free spirit that allowed them to take their musical experimentation on to the streets with an artistic sensibility open enough to allow that process inform their craft. Theirs was the definition of street music. It’s how it came to be and it’s where it belonged.

The Space Lady had a whole bunch of new tools to play with to help transform her immaculately chosen covers into brittle hymns for night and day dreamers. The impact of the Casiotone WT-40 in 1983 on sound was a dramatic one.

This was a battery-powered keyboard with a smorgasbord of sounds and effects. Schneider routed her vocals through a phase-shifter so everything is drenched in echo and delay. It could have sounded chaotic and wrong but instead it’s warm, fuzzy and uncommonly endearing, with everything in its’ right place. Heart and soul are evident in abundance. Down on the street, there’s nowhere to hide.