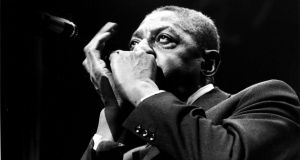 Sonny Boy Williamson: As well as having a voice that was sly, dark and world-weary he could also play the harmonica better than anyone else. Photograph: Val Wilmer/Cache Agency

At almost seven foot tall, Sonny Boy Williamson cut an impressive figure whenever he rolled into town. He made no bones about hiding his hard liquor habit, so that languid roll of his would occasionally incorporate the odd shake and stumble, but he was never one for falling down. And he never missed a show or left an audience not wanting more. Sonny Boy had the music in him. Adding strong whiskey just seemed to make it easier to come out.

A great deal of mystery surrounds his name. Earlier in his life in Tallahatchie County, Mississippi, he was called Aleck, Alex or Willie.

His choosing the name Sonny Boy Williamson was itself somewhat controversial. In 1941 he was hired the play the King Biscuit Time radio show, sponsored by the King Biscuit brand of baking flour, on KFFA in Helena, Arkansas. The producers began billing him as Sonny Boy Williamson as a way of catching some deflected starlight from another blues player known as Sonny Boy Williamson, who was far bigger news at the time. The early days of advertising were a little less fearful of litigation, it seems, and the ruse worked. The new Sonny Boy broke out through the medium of the biscuit. Pretty soon he commanded the cover of the packet itself, looking mighty fine with his bowler hat and irresistible, raffish charm.

He had a very distinctive style as a result. If there was a pattern it would generally be short, rhythmic bursts intertwined with long periods of impassioned blowing.

This was a mightily commanding sound all by itself. Depending on the circumstance or his mood, he could take his game up in an instant and insert the harp into the mouth and move with the tune without using his hands. He was a showman.

Some live footage from this period exists and his face is always a study of intensity and intent. Purely as a performer, he had few peers.

These are early recordings, a collection of singles that are powered up by the presence of supportive giants such as Muddy Waters and Otis Spann.

From these sparks a great fire was lit.

Avenged Sevenfold on storming The Stage and surviving Trump
10