Craft and graft of a Dublin guitar maker

Frank Tate has made instruments for Paul Simon, Ed Sheeran and Donal Lunny

Frank Tate is a luthier, making guitars and other musical instruments in his Dublin city centre workshop. Video: Bryan O'Brien 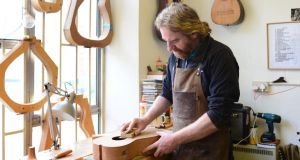 When Frank Tate moved to Dublin from east Belfast nearly three decades ago, he stayed at the photographer and D1 Recordings label founder Eamonn Doyle’s old home on Parnell Street and became immersed in a scene of musicians and artists that orientated around the nearby Welcome Inn and Thornbush pubs. Tate hadn’t been exposed to traditional music before then, and one night, his eyes focused on a handmade mandolin somebody was playing. Its owner taught him a few chords, and he was off.

Tate’s journey from an intrigued young fan to a luthier of astonishing talent is one built on craft and graft. A maker whose ideal working conditions lie somewhere just under the radar, Tate’s artistry extends to a musical community enthral to his abilities, both as a musician in Colm Mac Con Iomaire’s band, and a creator of stunning instruments. In this softly-spoken craftsman’s unassuming workshop, on Capel Street in Dublin, he has fashioned instruments for Paul Simon, Ed Sheeran and Donal Lunny.

Lit by a large window that points back towards Parnell Street, Tate’s small headquarters, filled with bouzoukis and guitars, also houses wood with a remarkable story. Salvaged from a Belfast shipyard, the raw Brazilian mahogany of Titanic-era liners (and perhaps even the doomed ship itself), has become Tate’s source material for instruments of breathtaking quality, all made by hand.

Really good old guitars, you hardly have to dig into them. They pop out. They’re vibrating to your voice. They become alive

A conversation about wood with Tate can feel like an understated lecture about life. “Different woods mature differently,” he begins, picking up a guitar-in-progress, “there is a kind of vibrational memory. Guitars are all tuned up with the same notes, and notes correspond to a frequency and a vibration. If that’s continually put through that wood, it does loosen up at those frequencies. It’s kind of like a drop of water following a path of least resistance down a window pane. Vibrations will go if the path is worn.”

He explains how the wood reacts in the instrument as it matures: “They become very responsive to that note. Really good old guitars, you hardly have to dig into them. They pop out. They’re wanting to vibrate. They’re vibrating to your voice. They become alive. You can feel the vibrations in them.” A new guitar, he says, “has to tune itself in”.

“When I make an instrument and go down and play in The Cobblestone and give it a good playing in, for two or three hours, then the next day it has completely changed. And it has picked up sympathetic vibrations from all instruments. That’s what I think I mean by vibrational memory. It does remember. It remembers frequencies. Or it offers less resistance at them frequencies. It’s basically a pump. It’s pumping air out through them holes. That’s what’s happening. The strings transmit the energy into that bridge, which makes the top and the back move in and out, and a complex wave relationship, which pumps the air – the sound – out.”

Back in the 1990s, Tate’s girlfriend at the time had an artist’s studio on Mountjoy Square. He bought some wood and tried to make a mandolin, and failed. When he saw an ad in the back of a magazine for a course in Glasgow, he left for Scotland, and trained in woodwork, an old-school education. He became an apprentice to a violinmaker, and then went to London to study at Guildhall. It was there his fascination with baroque instruments was honed, leading to one of his trademarks, sound ports that create an almost amplified effect in his acoustic instruments. For the player, it’s like having an extra monitor.

He eventually made his first mandolin, his pride and joy, but it swiftly taught him a lesson. At a festival in Scotland, someone offered to buy it. He initially balked until the violinmaker he was an apprentice to told him it was now Tate’s job to make and sell instruments. He handed it over, put the money in his pocket, and didn’t see it again until about 15 years later, when the mandolin came back to him for repair. “There’s an element of giving away your children,” Tate says of instruments leaving his grasp.

Guitar nerds started noticing Tate when they realised who made the guitars for Rodrigo y Gabriela for their debut album, Re-Foc. Tate picks up an off-cut of one of those guitars still lying around the workshop. Tate made the guitars from Mexican rosewood and Alaskan spruce. The emails started flooding in, “‘How much is one of those? How quick can you get one done?’, it was overload, just faceless.”

Tate wasn’t set up to produce at scale and was overwhelmed. But the experience offered clarity, as he realised he didn’t want to make guitars for strangers, or develop a global brand. He retreated into the craft.

“I’ve probably made 120 instruments or something,” Tate says, “and I know a lot of the people. I play tunes with them. I know them. It got into my head then that it’s about providing a service in your area, as opposed to world domination. There’s a big community of players in Dublin . . . they’re my customers.”

Picking up some wood, he describes its origin, “These would have been used on the big liners for the fit out; staircases, dining tables, wardrobes or whatever. This is all from the empire! Reefing it out of Brazil.” So, it’s Titanic wood? “I suppose it is, yeah . . . I’ve always been using salvaged mahogany. Brazilian mahogany is nearly extinct. I’m always on the look out for it. It just so happens I love the sound. I’m championing all-mahogany instruments at the moment. It’s a real distinctive tone. It’s kind of got a darker, crunchier sound. The treble, the high notes are more rounded. The guy out of Ye Vagabonds was just in here playing one, and I was playing another mahogany instrument, and it was gorgeous. I had loaned him a mahogany guitar before and he loved it. Such a good player.”

‘Thank you for your beautifully made instrument, I look forward to playing it for many years,’ the note reads, signed, Paul Simon

Moulds hang in the window, offering an insight into Tate’s process.

First, he draws the shape of the instrument on the wall and lives with that for a while, “you become obsessed over the minutiae of dimensions and stuff”. Then he makes the mould, and then the sides. Those are bent by hand using a bending iron. “I was taught the old way. You just actually rock the wood. You just bend it into shape; spritz it with those misters for flowers.” The lining is glued in, the shelving folds around the sides, and then “your top and your back are where all the sound comes from. This is generally not mahogany, the top of a guitar, it’s usually spruce or cedar”.

This is the crucial part. “The bracing pattern is where everything comes from,” Tate says, “It’s how strong the top is, the resonant frequency. You can control the note – the tap tone – by shaving bits off the braces, by thinning them or taking them lower or leaving them higher. It effects the frequency of the note. Once that’s glued on the top – I always glue the top on first – then go in and do fine adjustments when it’s on the rim. Then the final thing is putting the back on, closing the box. Once you’ve done that, there’s no going back.”

Tate taps a closed guitar, and the tone almost sounds like that from a tight bodhrán, “you’re looking for a certain note which you can control via the size of your apertures as well. There is a physics part to it, like. Technically it’s called a Helmholtz resonator . . . So there’s the tap tone off the top on its own, and there’s the tap tone when it’s joined. Then there’s the volume of air that’s pumped out, so that’s a factor”.

When Aiken Promotions commissioned Tate to make an instrument for Ed Sheeran to mark the singer’s concerts in Croke Park, Tate decided on a bouzouki, an instrument he heard Sheeran sound-checking right after he had given his tickets away to two girls on the North Circular Road when his niece couldn’t make the show.

He met Sheeran last year, after he made him a tenor guitar to mark his Phoenix Park shows. Sheeran adored the guitar, writing multiple songs on it. Another set list and note hangs on the wall in the workshop, “Thank you for your beautifully made instrument, I look forward to playing it for many years,” it reads, signed, Paul Simon. Another big moment for Tate was making a bouzouki for Donal Lunny, a musical hero of his.

High quality copies of classic guitars now abound, but as Tate says, there is no substitute for slow craftsmanship. He ignores the overwhelming technical information on guitar-making forums online, and shies away from figures and charts, preferring to lean on intuition. A mentor of Tate’s in Belfast – “a bit of an old hippy, in his late seventies now” – has his own thoughts on the matter, “he believes that you should just put some good vibes in when you’re making it,” Tate says. “That’s as good as anything.”