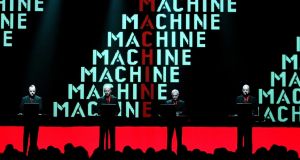 Kraftwerk on stage in 2004, with Florian Schneider on the right. File photograph: Juerg Mueller/Keystone via AP

Wednesday’s announcement of the death of Florian Schneider (typically, the actual date he died remains a mystery) sent me down a listening rabbit-hole through the many forms of music which bear his unmistakable influence. No matter where you go – contemporary art-pop, early techno, hip-hop and house music – all roads (or motorways or high-speed trains or cycle tracks) lead inevitably back to Kraftwerk, the band Schneider formed with Ralf Hütter in Dusseldorf and the music they produced together in the second half of the 1970s.

It’s not entirely clear what Schneider (who left the band years ago) actually did in Kraftwerk. In the their early days, before they arrived at the futuristic electronic group we now remember, he played flute and other instruments. He apparently wasn’t particularly adept at programming the synthesisers which became their sole instruments and seems to have been more of a guardian of the aesthetic mission of the entire project.

Kraftwerk (the name means “power plant”) were hardly the first musicians to use synthesisers. Karlheinz Stockhausen in Germany and John Cage in the US were exploring their potential from the mid-1950s onwards. In the 1960s, experiments were happening in places as diverse as the BBC Radiophonic Workshop and King Tubby’s studio in Kingston, Jamaica. There had even been a few novelty hits, before initial forays by The Beach Boys and The Beatles inspired a rather unfortunate wave of progressive rockers who achieved some acclaim among the Rizla-using classes.

Not for them the endless noodlings of prog; their songs had tunes and hooks and (apparently) simple ideas

Why, more than four decades later, do we look back to the records produced by Kraftwerk, and not to those at-the-time more popular multi-keyboard stylings from the likes of Emerson, Lake and Palmer, Yes or Tangerine Dream?

A few reasons. The first is Schneider and Hütter’s acute pop sensibility. Not for them the endless noodlings of prog; their songs had tunes and hooks and (apparently) simple ideas. The second is a rigorously thought-through modus operandi and a visual aesthetic that simultaneously embraced and gently parodied the high modernism of the West German economic miracle, and by extension the entire postwar western European project. (It’s not an accident that Schneider’s father was a hugely successful architect whose designs included Düsseldorf’s new airport). The third was the band’s discovery in the course of refining their sound of the mesmerising metronomic power of a looped electronic beat. This was something they had in common with their peers in Germany’s motorik movement, and even more so with the ecstatic Eurodisco productions coming out of Munich courtesy of Giorgio Moroder. The Anglophone world barely realised it at the time, but a new idea of what pop music could and would be was being forged in continental Europe.

That pop sensibility, for good or ill, would inspire a thousand synth groups in the decade that followed, while the beats and loops would point the way for a generation of African-American musicians towards hip-hop, techno, house music and successive  waves of dance music. But there’s something else. Kraftwerk showed that synthesiser music could be as highly emotionally charged as any other artform.

David Bowie was more astute, describing what Schneider and Hütter were making as ‘industrial folk music’

This may seem counterintuitive. If you’ve never heard Kraftwerk, the visuals and the song titles – Computer Love, The Robots, Autobahn – might lead you to expect a vision of urban dislocation and human alienation in the grim machine age. In fact, it’s far more interesting than that. “Joyous” might seem a strange word to describe four men dressed as identical mannequins performing songs with the verbal simplicity of nursery rhymes about pocket calculators and inter-city transport, but the abiding sense from the music is of joy tinged with deep melancholy (albeit all delivered with a dry sense of humour). You can argue about whether this apparent positivity about modern urban life now and into the future was justified, but in its own way it was deeply subversive and highly romantic. a pastoral vision of an industrial landscape.

Lots of people didn’t get any of that, of course. “Spineless, emotionless... keep the robots out of music,” huffed UK music mag Melody Maker. Not for the first time, David Bowie was considerably more astute, describing what Schneider and Hütter were making as “industrial folk music”.

What does the music Kraftwerk made in their heyday sound like now? It retains its strange, compelling, timeless beauty. To these ears, the melancholia seems more to the fore. Part of that has to do with our current circumstances. Nobody’s catching a Trans-Europe Express right now. The Tour de France has been diminished by scandal and corruption. The postwar miracle is looking less miraculous. Schneider’s Kraftwerk, though, lives on forever, in all its ambiguous perfection.