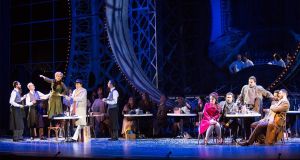 Simon Walton’s International Leisure and Arts is the company that has been bringing productions of popular opera by Russian companies to the Bord Gáis Energy Theatre in recent years.

With the addition of much-loved soprano Celine Byrne it’s been a bankable proposition, in spite of less than impressive stagings and variable vocal and musical standards.

Byrne is such a key part of the operation that her name is already featuring in advertisements for a production of Carmen that is coming next March, even though she will be in the role of Micaëla. The singer of the title role has not yet been named

Walton’s latest venture, Puccini’s La bohème in a production from Moscow’s Novaya Opera Theatre, directed by Georgy Isaakyan, designed by Hartmut Schörghofer and conducted by Jan Latham-Koenig, ran for five nights last week (with Byrne featuring on three of those nights) and upped his game a notch.

Isaakyan moved the setting forwards to Paris in the late 1940s, though without any sense of post-war privation. The imagery was Hitchcockian. The Act I garret looked out on the Eiffel Tower through a gargantuan clock face. The Café Momus in Act II was at the bottom of an Eiffel Tower that’s on its side.

For the Act III, toll booths at the Barrière d’Enfer the horizontal Eiffel Tower became a nightmarish spiral staircase. And Act IV forsook the original garret for a white art gallery, with Mimì split into a white-clad observer – a doppelgänger set apart who did the actual singing – and the black-clad seamstress who died in the company of her friends.

Byrne is appreciated in Ireland for her forthright, emotional delivery, and she was well matched in this Bohème in the free Rodolfo of Aleksey Tatarintsev, and his friends Marcello (Andrey Breus), Schaunard (Artyom Garnov) and Colline (Vitaly Evanov).

Stage and pit were not always in full agreement on the opening night with Latham-Koenig’s warmly detailed conception at times contrasting with the approach of singers who seemed to want to move forwards with greater urgency. But, overall, this was the best-balanced of the visiting Russian productions that’s been presented at the Bord Gáis Theatre.

Chat, but not too much

The RTÉ Contempo Quartet is engaged in a three-strand series, with each of six concerts bookended by works of Haydn and Bartók, with a piece by a living Irish composer in the middle.

The Contempos love talking to their audiences, whether it’s about the music they’re about to play or an indulgence in chit-chat. It’s a good idea for musicians as personable as they are, but it needs a little more discipline in execution. I’ve heard them stretch a lunchtime concert to nearly 90 minutes, which caused some people to leave early.

The quartet members take different approaches when they speak about music, with second violinist Ingrid Nicola being the player most sensitive to her listeners’ needs by pacing and pitching her delivery so that her words can come across clearly.

The group’s current series turns one of the conventions of spoken introductions on its head. There are printed notes for the concerts, by one of the featured Irish composers, Sebastian Adams. His essays on Haydn and Bartók are presented as personal narratives, offering one man’s engagement with the two composers as a way of illuminating not just Haydn and Bartók, but also the concerns of a young composer of the early 21st century. It was left to the Contempo’s introductions to delve a little more into the technical detail that’s usually the concern of printed notes.

On Sunday, their musical approach to Bartók’s Third Quartet was very modernist – high in contrasts, emphasising the harsh and the angular in ways that were guaranteed to be unsettling.

In Haydn’s Emperor Quartet – which contains a set of variations celebrating a tune, also by Haydn, that’s now the German national anthem – their playing was altogether more amenable, full of telling detail, and conveying the sense that this was a performance undertaken out of love for the music rather than, as some groups can make it seem, a feeling of historical duty.

The Irish meat in the musical sandwich was David Fennessy’s Bow Your Head. The work involves retuning the instruments so that the second violin and viola are a quarter-tone apart from the first violin and cello, and it takes its opening gesture on a journey through a world where a lack of familiar spacing creates the most disorienting and vertiginous effects.

“Collider” was the title of a concert at the Unitarian Church on St Stephen’s Green on Friday, presented by the Irish Composers’ Collective in conjunction with Note Productions.

The idea of invasion may not be strong enough. The contrasts were so strong that Brötzmann’s searing contributions were almost like hoarsely maniacal rants, unyielding flourishes that seemed little concerned with the tone that had been set by the composers – Aran O’Grady, Darragh Kelly, Robbie Blake, Raeghny Zutshi, Amy Rooney and Martin Keary. It was an interesting experiment in which the sax effectively blew everything else away.