Bombay Bicycle Club: ‘We had no plans to do anything again’ 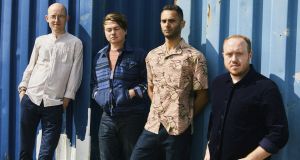 Bombay Bicycle Club: ‘We wanted to be looking forward, as well as celebrating our past’

When most bands or artists take a break, it often entails them going somewhere sunny, peaceful and removed from everyday life in a bid to regroup. For Jack Steadman, it involved hitching a lift on a cargo ship traversing the Pacific Ocean in early 2015. His band Bombay Bicycle Club had just announced an “indefinite hiatus” so their frontman – a big fan of solo travelling because “I hate compromising,” as he jokes – decided to take to the high seas to reclaim his creativity.

“I wanted to go to the most isolated place I could find, and that turned out to be in the middle of the ocean,” he smiles when we meet in the office of his Irish label, his bandmate Suren de Saram seated across the table. “I wish it was a bit easier to do; it wasn’t straightforward, but it was fun. And it was much more social than I thought it would be – in a kind of cool way, but I was a bit like ‘This isn’t what it’s meant to be like!’ All the crew were really cool and very friendly. We hung out a lot and did karaoke. They were really good at it.”

The London indie-rock quartet had been playing together since their mid-teens, and decided that it was the right time to step away from the band after the touring cycle for their last record, 2014’s So Long, See You Tomorrow, wound down.

We started selling most of our gear, which we’ve now had to buy back at inflated prices

“Whenever you get to the end of the touring cycle, the thought of the next album is always looming over you,” nods Steadman. “Because you do end up on this conveyor belt in a band, sometimes; album, tour, album, tour, album, tour. And that thought just bummed me out a bit. I really wanted to make a different kind of music. And I think it came at the right time, because it wasn’t just me feeling a bit tired and a bit jaded – I think everyone had things that they wanted to do that they couldn’t have, because we had been in the band since we were 14, 15. So the musical aspect of it was the main driving force, but it certainly wasn’t the only reason.”

Aside from providing an interesting interview topic, Steadman’s around-the-world trip also spawned what would become his solo record God First, released in 2017 under the Mr Jukes banner. An eclectic collection that drew influence from jazz, soul and electronica (and even featured Charles Bradley on one track), it was a necessary record to release solo, he says.

“With hindsight, when you listen to So Long, See You Tomorrow, you can hear this other style of music almost being crammed into it in a way that I don’t find very elegant, now that I look back,” he shrugs. “I’m really proud of that album, but you can hear all these different sounds and samples and quite eclectic textures from all over the world, being kind of just shoved into this record. And I think if I had done that anymore, it just would have exploded. I’ve now realised that it was it was right to separate them at that moment and all those samples and more hip-hop and electronica could go into the Mr Jukes basket – and then you could keep Bombay Bicycle Club as just this kind of... guitar band.”

Other members of the band pursued different lines, too; bassist and co-songwriter Ed Nash released his own solo album under the pseudonym Toothless, while drummer de Saram continued to play as a session musician for Jessie Ware amongst others. He admits that it was a real possibility that Bombay Bicycle Club would not regroup at all.

“We certainly had no plans to do anything again at that point. We started selling most of our gear, which we’ve now had to buy back at inflated prices,” he laughs. “But [2019 was] the 10th anniversary of our first album coming out – so it was the talk of maybe doing some shows to mark that, that got the ball rolling on the album. Then it escalated into eventually making a full-on new album. We wanted to be looking forward, as well as celebrating our past.”

No one had written anything with the band in mind during their hiatus, so Steadman and Nash returned to the fold with a blank slate in front of them. They embarked on writing sessions in a house in Cornwall every month, citing first single Eat, Sleep, Wake as a turning point “where everyone got excited and felt confident and felt like we could actually do this.”

The title track of Everything Else Has Gone Wrong mentions their “second wind” and was the last song to be written for the album. “I think those lyrics are reflecting on the ups and downs of writing music, and that feeling of just feeling relieved when you’ve finally done it,” explains Steadman. “It can be sort of emotionally difficult to have these real highs of writing something great, but then weeks and weeks of uncertainty and self-doubt. It’s very much about that kind of oscillation.”

Bombay Bicycle Club have never made the same album twice, but in any case, their time away from the band brought a new eclecticism to Everything Else Has Gone Wrong. Steadman accepts that his Mr Jukes solo project may have had an impact.

“I imagine subconsciously, it did,” he says. “But I do write music in the same way for both projects; it’s always starting with a laptop and samples from my hard drive, and just drums. And then I guess with Bombay, you just kind of swerve it into a more “band” kind of framework and put some guitars on it.”

The album’s title (and its lyrical themes) may suggest tongue-in-cheek pessimism, but they both claim that it’s supposed to be an optimistic album; a salve in the shape of music amidst the constant turmoil of modern living.

“I guess ‘music is the salvation’ is the broad stroke that that we hope everyone can can relate to,” Steadman says. “For me, it was very much more like an introspective, ‘Everything else has gone wrong’ in the more miniature scenes in your life, where you’re just walking home somewhere and you’re feeling a bit depressed, or you’re waking up and you’re just feeling anxious. I mean, it’s not really like what’s happening in the world, but it’s very personal. And for me, I can write music and that’s really cathartic. But for other people, it’s just listening to music. Obviously, that’s the same for me, too – but [writing] music has always been a better communicator.”

If we do go on to make another album eventually, it’ll be similar to the last few years: we need some time to go away and experience a bit of life individually outside the band

Working with producer John Congleton at his Los Angeles studio was a great leveller, Steadman says, although he admits that he initially had reservations.

“We knew that there was going to be some friction there, because the way that he works is so different to how we’re used to working,” he says. “He works very quickly and very instinctively – and we like to spend a long time fixing mistakes and striving for perfection. But I find personally, I’m less of a perfectionist now. I really changed a lot in just those three weeks. He was very contagious; his personality. He’s kind of quite philosophical in a way; like, ‘None of this matters. It’s all meaningless’.”

“His trademark quote was ‘Everything’s just a distraction from death’,” adds de Saram, laughing. “When you’re making music or doing any kind of art, you do have this huge inflated sense of what you’re doing, and it’s so important for someone to bring you back down. A lot of the time, producers do the opposite to what John does and further expand that ego – but it was great to work with someone who was like ‘Nah, no one cares, man’.”

For now, they are taking things slowly and have signed a one-album deal. The future of Bombay Bicycle Club remains very much in the realm of ‘seeing how it goes’.

“We’ve made tentative plans to make an EP, maybe next year,” adds Steadman. “But we’re not thinking too far ahead, just because of the nature of what we’ve just done.”

“I find it difficult to imagine us completely drawing a line under the band and doing some farewell shows, though,” de Saram says. “I’d like to think we’ll always leave the door slightly ajar. I think if we do go on to make another album eventually, it’ll be similar to the last few years: we need some time to go away and experience a bit of life individually outside the band. I think that’s very healthy.”

Everything Else Has Gone Wrong is released on January 17th. Bombay Bicycle Club play Vicar Street on February 10th and 11th