Black Sabbath’s Tony Iommi: ‘I’ve been on the road 50 years - I have to live what life I’ve got’

Having been diagnosed with cancer in 2012, Iommi was told his rock’n’roll days were over, but the inventor of heavy metal had other ideas 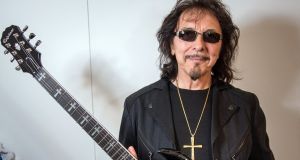 Tony Iommi: “You automatically wind yourself up saying, “that’s it then”, but that is not always the case.” (Photo by Thomas Lohnes/Getty Images for Gibson) 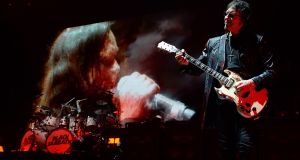 How is your health at the moment Tony?
I went for a check four weeks ago and the doctor said that at the moment there is no activity where I had the cancer before, but there is activity in the throat. When I get back to England, I have to have an operation to remove this thing at the back of my nose. The doctors found a lump there and we don’t know if it is cancer or what, but I feel OK at the moment.

How has it changed your perspective on life?
I was knocked for six when the doctors told me that it was, that it was stage III cancer. It really did change my life as far as what I have to do now. I have to live what life I’ve got because I have been on the road nearly 50 years. I need to be at home more and I need to pay more attention to my friends and family.

What was the lowest moment for you?
The lowest moment was being diagnosed. You automatically wind yourself up saying, “that’s it then”, but that is not always the case. When they tell you, you think, “oh God”. That was a low time. I have had a few low times in my life like everybody has, but that was one that stuck in the head.

How does the diagnosis compare to when you lost the tips of your fingers in a factory accident aged 18 and were told you would never play guitar again?
It was similar, but the thing with the fingers, you can carry on. But with cancer, you just don’t know. You don’t know how long you are going to be here and how bad it is going to get. It is sort of a different thing.

When the fingers first happened, it was devastating. It really set me back, but it gave me an incentive to fight and to try and overcome it and come up with a way of being able to play guitar. A lot of people said I wouldn’t be able to do it. It is the worst thing to give up. You just have to work with it.

How important is industrial Birmingham to your story?
The way we were brought up and where we lived in Birmingham was really important to us. I worked in a factory and I think it is a big part of where the music comes from within you, the way you lived your life.

I went to a Catholic school as did Terry (Geezer) Butler, whose family are Irish, so we knew quite a few Irish people growing up.

Do you remember the Birmingham pub bombings in 1974 and the aftermath?
We were over in America quite a lot at that point. I remember one particular incident when we were doing rehearsal for a tour in some part of London which had a big Irish community. We used to have a lot of effects on stage at one point. We were testing the pyro in this place. Right next door was a pub. We tested the pyro and everybody ran out of the pub thinking it was a bomb.

Your first record Black Sabbath in 1970 is regarded as the first-ever heavy metal record. Did you think recording it that you would be creating a new genre of music?
When we first did Black Sabbath, we didn’t know what kind of music it was really. We just liked it. We wanted to make it heavy and we wanted to play something that we felt in ourselves. As soon as we wrote the first couple of songs, which were Black Sabbath and Wicked World, instantly we had that feeling of excitement inside. It felt instinctively right and we knew our direction from then on. All the stuff I wrote from then was like that.

Are you comfortable with the label heavy metal as far as Black Sabbath as concerned?
I’ve learned to live with that now. Many years ago, we were asked this question and we said, “no, no, we’re heavy rock”. There has to be a term, and people have put that term on it. I’m fine with people calling it whatever they like as long as they like it and I like playing it.

You launched your comeback as Black Sabbath on 11/11/11. Has the reunion gone as expected?
Being able to have a number-one album (13) after all these years and then to be able to go out and tour has been fantastic, but it is a shame that Bill Ward (original drummer) wasn’t involved. What can you do? It is one of those things that happened. It was Bill’s choice in the end.

Do you know why Bill decided not to tour with you?
It just got silly. He got into a legal battle somewhere with the management and Bill pulled out and he did not come back. It was very difficult. I don’t exactly know what was going on in everybody’s mind at the time, because we started all together, but then it got too involved. I don’t know what Bill thought. It just didn’t happen in the end.

Also, we were also concerned about how Bill was going to play and how he was going to handle things. He had a heart attack and then he had stents put in. It was a difficult time, and then, of course, I came down as ill. It was almost falling apart and we pulled it back together. Bill made his choice not to do it and that was it.

Where do you think 13 ranks in the pantheon of Black Sabbath albums?
I enjoyed doing the album. We did a lot of writing the album at my house because of my treatment. Everybody backed me up and I thought, “This is it, I might not be here next year. This has to be it”.

It was good for me that everybody was around me spurring it all on. We got on really well. It has still been the same. It really has been nice. It is very sad that we are going to finish touring, but I hope that we will do something else. I’m not going to tour the world again, but it would be nice even if we did the occasional one-off show or an album.

So is there a possibility of a new album?
We haven’t talked about it. This is my view thinking it would be nice. At the moment, I think there is a call for a bit of time off really. I think anything is possible. It is down to how everyone feels and if people want to do it.

You have called this tour The End. Is this it?
It is the end as certainly as far as touring is concerned. I hate to sound so definite, but I have to look at it that way now. We’re not getting any younger. It is difficult touring now. We travel the best way we can travel. We have our own plane, we have great hotels. On the stage, it is fantastic.

The days off are boring because you are stuck in a hotel. We don’t socialise like we used to do years ago and go down the bar and drink because everybody is a recovering alcoholic. I’m the only one who still drinks. It is just different now. Everybody has their own space.

When you are doing tours, you are on constant alert even when you have a month off. It takes me two weeks to wind down and then I start building up again. If you let it go, it would be more creative in the end. If we didn’t have any kind of schedule, you could just leave your mind to be a bit freer.

Kerry King thinks there are no guitar heroes anymore. There is no one out to inspire the young people. Would you agree?
I could see what he is saying. At this particular time there are a lot of people who are either passing away or retiring, and these were the people that were looked up to. It is hard to say who is going to be a guitar hero next. I don’t know. You still have your Eddie van Halens and people like that who are very creative guitar players.

You’re with Sky’s Guitar Star programme. How was that?
I really enjoyed it. It was great to see the young guitarists playing. It was an interesting show I thought. There are so many great young guitars out there who are all learning from each other. They are almost too good. God I just don’t know where it is going to end up.

I still love the basic guitar players going back to the blues like Jeff Beck.

I noticed when I was doing Guitar Star that the guy who won, Zayn Mohammed, was an excellent player playing blues background. He could play fast and all different styles. That is the type of guitar player I really like.