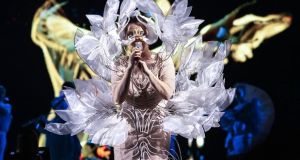 Part theatrical production, part adventure into the far reaches of space and under the sea, Björk’s Cornucopia tour stuns the audience into silence in the 3Arena with a show that pushes the realms of possibility within the usually strict confines of an arena tour.

Backed up by 18 members of Iceland’s Hamrahlid Choir (plus conductor), a seven-piece band, including a harpist and a flute ensemble, and occasionally stepping into a specially designed reverb chamber to sing without a microphone, no expenses are spared as Björk’s artistry and vision swallows you whole.

The choir opens with a set of traditional Icelandic songs and choral arrangements of Sonnets/Unrealities XI from her 2004 album Medulla and 2011’s Biophilia. Whispers, mumbles and coughs from the crowd puncture through the harmonies and the conductor in traditional dress cajoles people in the front row of this all-seated gig to sing along.

Björk doesn’t physically appear on stage until 25 minutes in, but this clash of traditional with contemporary allows her to weave between time and space because… well, it’s Björk and the rules of science have never applied to her.

With vibrant colours of wild fungi tripping and folding across the stage, forest sounds flit through the arena. Cornucopia is an immersive experience that combines the best in digital design (by German artist Tobias Gremmler), live music and a profound reverence for nature.

Directed by Argentine filmmaker Lucrecia Martel, the tour began in May with an eight-night residency in New York’s The Shed and with Dublin acting as its fourth last stop for 2019, its execution feels like a manifesto for the future of live music.

In pictures: Björk live in Dublin

Earlier this week, Canadian musician Grimes made the claim that due to new technologies and the advancement of AI culture “live music is going to be obsolete soon”. However, speaking as the woman who goes out with Elon Musk, or “the voice of silicon fascist privilege” as musician Zola Jesus so eloquently put it on Twitter, she could not be more wrong, because Björk’s experimentation with worlds old, new and yet to exist defies that theory entirely.

Sticking largely to songs from 2017’s Utopia and 2015’s Vulnicura, she reworks familiar songs like 1993’s Venus as a Boy, accompanied by just a flute soloist, to visually and sonically demonstrate the layers of detail that go into her music.

Likewise, kitted out in otherworldly costumes designed by Olivier Rousteing of Balmain and Iris van Herpen and headpieces by James Merry, which are all white to reflect the play of light, Björk showers us with creative wealth at every turn.

As blasts of neon rush through the stage and catch the fringe of her lavish glowworm gown, she is the queen of the deep sea urchins that are projected on the screen sheet in front of her and the walls behind her. The urchins fall and rise in time with the strings and flutes, commanding the power and strength of the storms at sea. If this sounds trippy, it absolutely is because Björk has found the trap door to the underbelly of Disney’s Fantasia and she’s running riot.

Using the brightness and the beauty of the stage production, she creates a utopia where the present dangers of climate change are non-existent. However, when the darkness of Sue Me builds and videos of Greta Thunberg are projected on stage, she throws our stark reality into this realm of deep fantasy.

“But I’m here to tell you that change is coming, whether they like it or not,” says the 16-year-old environmental activist. “The real power belongs to the people.”

Not necessarily a call to arms but a jolting reminder that this utopia can no longer exist, so we have to fight for whatever beauty is left in the world. Closing with Future Forever and Notget, Björk lets that point simmer over the awestruck audience.

Marching to no one’s beat but her own, she unravels expectations of a live experience and sets new ones that tower above everything else.