And the beat goes on: The week’s best jazz gigs 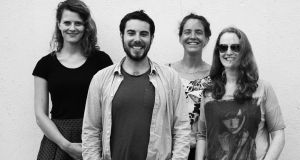 Kamasi Washington short-circuited the long and winding road to jazz stardom by taking his late Coltrane pastiche straight to the top of the commercial pop charts. No surprises then that the 37-year-old saxophonist generates column inches from non-jazz scribes, though he receives scant attention from “insider” jazz sources (ahem). Washington’s appearance on the lengthy bill at this weekend’s Beatyard festival will excite the hipsters, but the ticket price is likely to deter all but the most determined jazz listeners. Also on the Beatyard jazz bill on Sunday are French nu-jazz pioneer Ludovic Navarre – better known as St Germain – and Irish-Sierra Leonian singer Loah.

South Floridian rapper Jamel Franklin first came to the notice of Irish ears as one of the frontmen with jazz-meets-hip-hop funksters Mixtapes from the Underground. Shy Mascot is the gentle giant’s own project, placing his thought-provoking rhymes over luscious jazz grooves from a band of up-and-comers on the Dublin scene, including vocalist Fiadh Rua Gregg, keyboardist Eanna Ryder, bassist Keith Tobin and drummer Andy O’Farrell. Franklin confounds the MC stereotype – bashful rather than boastful – but that just makes this elision of rap and electric jazz all the more engaging.

Given the amount of research that shows what complex music can do for brain development, there really isn’t enough high-quality creative music directed at children, so bravo for the Fun Size Jazz series from the Ark and the Improvised Music Company. These afternoons, hosted by MC Sam Kavanagh, give children and musicians a chance to get the measure of each other and figure out what they like – and what they don’t. Dublin-resident US blues guitarist Ben Prevo, adventurous cellist Lioba Petrie and imaginative vocalist Emilie Conway each present a short show developed specifically for children, assisted by a roll-call of senior jazz musicians, with plenty of opportunity for interaction and learning on both sides. Parents may learn a thing or two themselves.

Wexford musician and composer Laura Hyland’s Clang Sayne are venturers in the post-genre slipstream, weaving folk, improv, art pop and contemporary classical into new material that is soft on the ear but tough as leather. On this under-the-radar tour of more-or-less out-of-the-way venues, the band – Carolyn Goodwin (clarinets) Judith Ring (cello) and Matthew Jacobson (percussion) – unveils a set of new music conceived during a week-long jam session on the shores of Bannow bay in Wexford.

The real Sound of Music: Maria was no flibbertigibbet, and she didn’t teach the kids songs
4

Maeve Binchy: Was she a ‘quiet’ feminist?
8

Don McLean on the meaning of American Pie: ‘Who cares, who gives a f**k’
9

The Cure’s Robert Smith: ‘I survived. A lot of people in London didn’t’
10