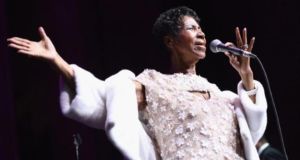 An ailing Aretha Franklin was visited on Tuesday at her home in Detroit by Stevie Wonder, the Rev Jesse Jackson and her ex-husband Glynn Turman, as tributes to the Queen of Soul poured in from around the world.

A spokeswoman for the Franklin family confirmed the visits and said in a statement that Franklin (76) is “seriously ill and surrounded by family members who appreciate the outpouring of love and support they have received”. No additional details of Franklin’s illness were given, and the spokeswoman, Gwendolyn Quinn, declined to answer further questions.

According to two people who were in touch with the family but were not authorized to discuss Franklin’s condition, the singer of Respect and Natural Woman, who is universally hailed as one of the United States’ greatest voices, has been receiving hospice care at home.

Like people all around the world, Hillary and I are thinking about Aretha Franklin tonight & listening to her music that has been such an important part of our lives the last 50 years. We hope you’ll lift her up by listening and sharing her songs that have meant the most to you.

Since the news of Franklin’s illness emerged on Sunday, fans, celebrities and world leaders have offered signs of support. Beyoncé, performing with Jay-Z in Detroit on Monday, dedicated their concert to Franklin. “We love you and thank you,” she said.

Also on Monday, former president Bill Clinton posted on Twitter that “Hillary and I are thinking about Aretha Franklin tonight & listening to her music that has been such an important part of our lives the last 50 years.” Franklin sang at Clinton’s first inauguration, in 1993.

Franklin also sang at Barack Obama’s first inauguration, in 2009. She was a Kennedy Center Honoree and received the National Medal of Arts and the Presidential Medal of Freedom, and she was the first woman inducted to the Rock & Roll Hall of Fame, in 1987.

Mariah Carey, Patti LaBelle, Chance the Rapper, Lin-Manuel Miranda, Rod Stewart, Missy Elliott and Tyler Perry were among the many celebrities who paid tribute on social media. Franklin, who has won 18 Grammy Awards, has had a long history of cancelling concerts for health reasons, but she has not specified an illness. Her last public concert was in Philadelphia a year ago, and last November she sang at an event for the Elton John Aids Foundation in Manhattan. – New York Times