A conductor in search of the Furtwängler factor

Cristian Macelaru’s in-your-face style frees up the RTÉ NSO, perhaps too much so 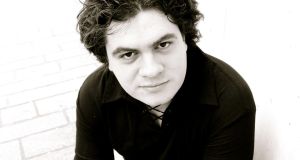 What does a conductor do with an orchestra? Well, according to the US-based Romanian conductor Cristian Macelaru, he finds a way to let the musicians play. Or, more precisely, he frees them up so that they can play at their best.

There is a great, and apparently true, story about Wilhelm Furtwängler, principal conductor of the Berlin Philharmonic Orchestra, which has a bearing on how a conductor can help musicians play their best. Furtwängler had to go through a denazification process after the second World War and was not allowed to return to his post before the process was complete. A guest conductor was rehearsing with the orchestra and having huge problems getting the players to do as he wanted.

In the middle of the ongoing difficulties Furtwängler came in and stood at the back of the hall. The players could see him, but of course the conductor couldn’t. And in a flash, the mere fact that the revered Furtwängler was now listening, changed the music-making on the stage.

The frustrated guest conductor suddenly began to enjoy himself for the results he was achieving. Or thought he was achieving. When Furtwängler left, the playing went back to what it had been before, and his exasperation returned.

It’s interesting to wonder whether if Gustavo Dudamel, Simon Rattle, Mariss Jansons or Bernard Haitink were spotted eavesdropping on a rehearsal by the RTÉ National Symphony Orchestra, some similar galvanising transformation might also take place.

The big question is whether a conductor with Macelaru’s goals will just bring a group of players to the point where they achieve the best that they have already achieved, or whether he can somehow nurture them further so that they can move into a region that’s genuinely new for them.

Macelaru’s concert on Friday suggested the former rather than the latter. It was a programme that blended folksiness and orchestral splendour, and included two late 20th-century works, one from Ireland, the other from Poland.

The folksiest flavours were in Zoltán Kodály’s Dances of Galánta, a 1933 exploration of gypsy tunefulness with a 20th-century twist. Kodály spent seven years of his childhood in Galánta, which, although it is in modern Slovakia, was then a small Hungarian market town. It had a famous gypsy band, which provided him with his first experience of orchestral sonority. He took the material for his set of dances from an early 19th-century book that featured music by gypsies from Galánta. Macelaru presented the music in appropriately vivid colours.

Seóirse Bodley’s A Small White Cloud Drifts Over Ireland is a juxtaposition of avant-garde gestures with specially composed traditional Irish elements that startled Irish listeners when it was first performed in 1976. Macelaru came at the music from quite a different angle than the Irish conductors who have undertaken this piece.

Bodley’s reputation in his home country is as an avant-gardist who’s not shy of embracing other styles whenever the mood takes him. Macelaru gave the impression of seeing A Small White Cloud as a folksy piece that adds an unexpected spiciness by tossing in a few flavourings from the world of the avant-garde. The approach was utterly intriguing, even if it did serve to mute the shock value that has been so pronounced in previous performances of the work.

Witold Lutoslawski’s Partita is one of the Polish composer’s most popular works, although it is usually heard in the original version for violin and piano rather than in Lutoslawski’s later orchestration. Friday’s soloist was the RTÉ National Symphony Orchestra’s leader, Helena Woods, free and nimble in the faster movements, probing in the central Largo. The two ad-lib interludes with piano (Fergal Caulfield) were not quite as successful, and the balances Macelaru struck between solo violin and orchestra were not always well judged.

In his pre-concert interview with Ciara Higgins, Macelaru rightly remarked that the piano version of Mussorgsky’s Pictures at an Exhibition and Ravel’s later orchestration are best considered as different pieces. I’ve always preferred the raw nonconformism of Mussorgsky’s original, and find the orchestration works better the more Ravel-like the musical approach.

Macelaru’ s in-your-face style gave the players their head, and there was plenty of hustle, bustle and excitement in a reading that freely went over the top. It was one of those performances in which a little restraint would have gone a long way.

Sunday’s Hugh Lane gallery concert was a belated 60th-birthday celebration for the Drogheda-based Dublin composer Michael Holohan, who was born on March 27th, 1956. His music is often sparked by a sense of history and place. The titles Carving the High Cross (a piano solo) and Sunset on Inishmore (clarinet and piano) are self-explanatory.

He takes inspiration, too, from literature. The Given Note is a setting of Seamus Heaney for soprano and piano, the solo piano piece The Forge is also Heaney-inspired, and the punning title The Snotgreen C for solo flute does nothing to mask a connection with James Joyce.

Holohan attended masterclasses with Pierre Boulez, Olivier Messiaen, Iannis Xenakis, Luciano Berio and Helmut Lachenmann, and the fondness for hard-edged sonorities that he took away from them was later mixed in an oil-and-water kind of way with familiar tonal elements.

On Sunday, his music was well served by his own rather rebarbative piano playing as well as by the more adaptive talents of Paul Roe (clarinet), Brian Dunning (flute) and Niamh Browne (soprano). He also included an improvisation, adding the percussionist Daniel Roe to the lineup, though this was a peculiarly stilted affair.