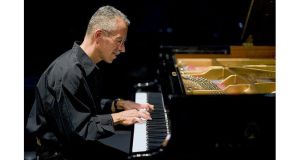 It’s a welcome relief, then, that Jarrett hasn’t read the script, and he breezes onstage in flying form. Between tracks, he bows frequently, full of banter and anecdotes; when a phone inevitably goes off, he laughs about it; he even solicits requests (sort of). Are we sure we have our man?

Well, yes. Given the sounds coming out of the grand piano, there could only be one particular person on stage. He begins in complex, classical mode, improvising through a dense, articulate piece that promises to bring his concert into really challenging areas; this is a one-off, though, and he never quite returns to this type of playing.

From here on in, Jarrett relies more on his gorgeous colour and tone, adding depth and impressive emotion to his crafted improvs, making every note count. He wraps silvery lines up the board, brings a sense of drama to his music-making that few people can match, injects bits of funk here and there, and even takes the blues out for the odd walk.

Jarrett frequently gets off his stool, humming and muttering his musical lines in a style that has become all his own, as he digs deeper for his next approach. This is a tightly tempered gig, though, and it never feels as if he is truly pushing himself. This is the sound of a formidable maestro in smooth, flowing action, not the raw pulse of a player being pushed to his limits.

Jarrett roams his idyllic musical countryside, and the audience seems largely delighted with the views, but it’s a little predictable and the expected fireworks never materialise.

There is probably no one like Jarrett for knowing how to give songs such a sense of completion in their closing bars, and his encores here are suitably stylish. My Wild Irish Rose sets up a bluesy improv before he bows out – inevitably, satisfyingly and rather beautifully – with Somewhere Over the Rainbow.