The composer’s music is at its best when it accompanies something with a strong visual element, such as a film or dance show 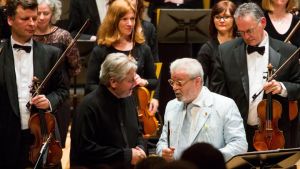 In the 1980s, Limerick-man Bill Whelan was for a time a member of the trad band Planxty before his first notable success as a composer, the film score for the 1985 film Lamb. There followed scores for Some Mother’s Son in 1996, and Dancing at Lughnasa in 1998. Meanwhile, the music that lit the turbo-charger on his career and earned him an immense international audience was his interval music for the 1994 Eurovision Song Contest: Riverdance.

Whelan, celebrated over the weekend with concerts in Dublin and Limerick, unfailingly evokes Irish places, history and collective emotion by marrying the lone voice of the Irish folk tune and the energy of traditional dance rhythms with the sound world of the symphony orchestra. His music can be the pièce de résistance when it accompanies something with a strong visual element, such as a film or dance show.

How well it works divorced from that visual element is something these concerts test. It is less successful in his Riverdance Symphonic Suite, a 35-minute compression of the two-hour dance-show music that stretches thin the dense creativity of the seven-minute original.

More effective is the new work, Linen and Lace, which celebrates his native Limerick and has its world premiere in Dublin. Although, like the suite, it is overdependent on technical devices such as very long pedal notes, it is enlivened by the presence of a concerto-style soloist, in this case James Galway, who is in his element.

The best music and performance come in the 20-minute Inishlacken, again in concerto style and for two violins, one classical (Catherine Leonard) and one traditional (Zoe Conway). Here there is more economy and concision, so that the beautiful intertwining of solo lines and evocation of a lonely island off the Connemara coast never grow static. Whelan assigns more to the classical violin, and Leonard plays with her customary elegance of line and intensity for the most memorable performance of the evening.