‘Other Voices’ unearths another Northern gem in Rosey Carney 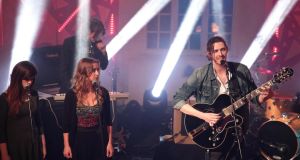 Other Voices has a habit of unearthing a Northern gem for each festival. Soak made the trip down from Derry in 2012, and this year Rosie Carney made a seven-hour journey from Donegal for a 20-minute set. It’s worth the effort.

Carney has a bluesy, winsome charm about her that’s uncommon for a 16-year-old. Here, some nerves in the live broadcast situation are evident when she gets on stage but once she starts playing, the songs take over and her short set takes charming, elegant shape.

Playing a cover in this situation is always a risky business, but Carney takes something as familiar and funky as Michael Jackson’s Thriller, decouples the groove and turns it into a haunting, shimmering thing. It pays handsome dividends.

Lulu James is an altogether different proposal. From beneath a glittering black and silver cape she whips out her powerful new soul grooves while her band build up an electro, dub step sound that’s an excellent complement to her vocal’s more vintage timbre.

The church is filled with bass and soul, while James prowls around the stage, fronting her band with uncommon confidence and self-assurance.

Some of the band’s opening tracks could use more time in the writing room, but when they add more funk to the mix, and find themselves in Erykah Badu-like territory, the whole sound clicks into place.

The energy pouring off the small St James’s Church stage is impressive, and towards the end of the set, James dedicates a track “to all the Dingle ladies”; the locals look like they might just adopt her on a permanent basis.

Wilis Earl Beal is one of modern music’s enigmas. Here he is in typically opaque form, and gives Lulu James a run for her money in the sartorial stakes.

Taking to the stage in a cape and bandit mask, and announcing his band as The Church of Nobody, Beal then lays into a set of challenging, raw blues, loaded with dissonance and grit, and songs as bleak as rain in a scrapyard.

Beal’s Chicago-hammered voice is extraordinary: he could easily choose to soften its edges and his songs, and release an album or two that would sell millions. Instead, he draws in much darker hues, writhing and twisting about the stage while tearing the notes and lyrics up from the pit of his stomach and heart.

That said, he’s not above a bit of wry introspection. “You’re too kind,” he growls after another burst of applause, before giving a shout out to Katy Perry and Miley Cyrus for being “salt of the earth; you need that”. It’s a bewildering, primal set of gripping music, and Beal leaves everything on the stage in a performance that holds nothing back.

Hierarchies at Other Voices are frail and fleeting, but if there was a headliner last night, Scottish band Mogwai probably deserve the title.

The band have carved out a largely instrumental template and an explosive live reputation that has earned them a rock-hard fan base.

Anyone expecting them to tone down the grunt for a tiny church in Dingle is sorely mistaken. Earplugs are given out at the door; ignore them at your peril.

The band could have packed out their six-song set with a few familiar beasts from their formidable back catalogue. Instead, they almost exclusively unload tracks from new album Rave Tapes, which despite its name sticks to their post-rock prescription of silos of synth lines and keys, riffs the size of cliffs, and drums and bass that lay siege to the crowd.

The show builds slowly up to a blistering, immense fury of music, with only one track, How to Be a Werewolf, coming from their released albums. This is epic in volume and impact.

Philip King and Other Voices have one other trick up their sleeves, this time in the form of Australian musician Josef Salvat. How do you follow the sturm und drang of Mogwai’s all out musical assault?

Salvat’s succinct response is to introduce a set of precise, polished pop that’s got plenty of its own particular punch. Salvat gets a terrific amount of melody out of his two musicians, playing drums, bass and a bank of synths and effects between them, and his clean lines and elegant delivery have more than a touch of David Byrne about their colour and shape.

He’s a relative unknown in these parts of the world, but on the evidence here, particularly on the standout track Hustler, there’s plenty about his music to suggest that he could become a familiar musical fixture.