Electric Picnic: ‘That’s only 48 divided by three cans a day’

Archive Video: Day one of Electric Picnic 2015 starts off with a bang as the crowds arrive, the music starts and tents are pitched. 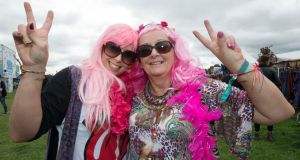 Fifty thousand people arrive at Stradbally in a Wacky Races traffic jam of campers, buses and jalopies. They’re here to commune with nature via massive sound systems, artisanal food and hundreds of thousands of plastic cups. Only every 50th car contains a disgruntled local who’s just going to the shops.

Inside, a whole town has been constructed with an economy based on beer, hippy sentiments and corporate branding. People are wearing fake Afros and cowboy hats and native-American head-dresses, as is tradition. There are plastic- flowers in hair, paint on faces and ear-protectors over the noggins of angry infants.

There are also T-shirts with interesting slogans, such as “don’t be a dick” and, mysteriously, “drummers are the second most f**ked member of the band”.

“Friday is so strange at Electric Picnic, ” sighs an ennui-filled, sunglasses-wearing girl called Karen Ryan. “Everyone is so . . . hung-under.”

Still, there are early outbursts of high spirits.

Over at the Greencrafts area, craftspeople, blacksmiths and hula-hooping women prepare for the inevitable collapse of capitalism. Pat Lawless has made four beautiful chairs out of bits of tree and is whittling a bowl in a pre-Viking style.

“There isn’t even any electricity [in this section],” he says. “And over there you have the Electric Ireland stage. It’s the yin and yang.”

Naomi Hanlon and Susan Usher are flouncing around in wedding dresses. “It might be my last chance to wear a dress like this,” says Hanlon sadly, an old maid in her 20s. Hanlon’s father is taking photos of them and asking passersby, “do you want to marry one of them”?

Nearby is a full-sized London bus semi-buried in the earth.

“I saw it land,” says a man called Lab Tech Jack. He’s wearing a white coat and manning the Incredible De-Programming Machine, in which people have their pre-Electric Picnic lives sucked from their body.

“There was a big flash in the sky and then the bus came flying through the trees into the ground. The bus driver stumbled out of the smoke . . . He said it was 1972. We had to explain to him that it was 2015.”

He gets a turn. “Get a load of this,” he says proudly, before picking out a melody with one hand. “It’s the music from Inspector Morse.”

In Mindfield I meet Colm, a trusted source. “I’ll tell you what’s what,” he says. He tells me that Grace Jones might be performing “half-naked” in body paint.

We all turn and stare at a man who look a bit like, but definitely isn’t, Damon from Blur.

“Damon from Blur,” says Colm, shaking his head in wonder. “Imagine that.”