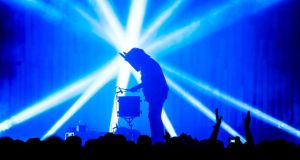 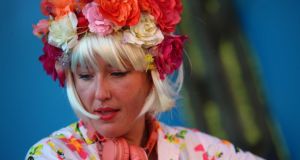 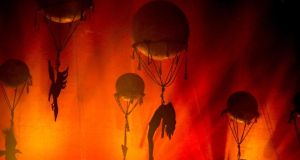 Stage design to the fore at Body and Soul. Photograph: Allen Kiely 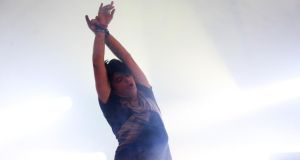 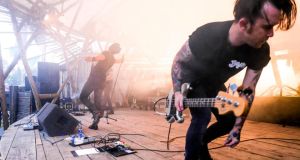 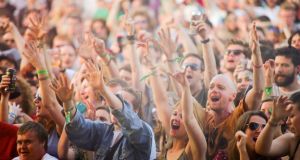 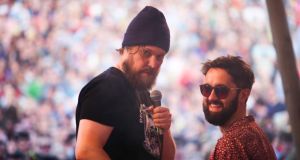 With capacity up more than 30 per cent at this year’s Body and Soul, there’s a need to push the musical lineup’s capacity to match. So this year, the main stage opens for the first time on a Friday, with the stars above us and Darkside below, the sole headline act on a solo 12.30pm slot.

Nicolas Jaar is already a formidable DJ, but this side project with live guitar is a much broodier, darker offering. With most of the Friday night revellers packing into the main stage, the stage is set for a soaring set of music. Darkside, though, don’t so much slow burn, as put the oven on to preheat while popping out to the shops. It’s slow and methodical with occasional bursts of light, pulse and noise. Here in the outdoor natural amphitheatre, it feels a little underwhelming; this is music better suited to the dark, numb comforts of a city centre club than a festival headline slot. - Laurence Mackin

Elsewhere, the tents are packed with music and sound. Sally Cinnamon and Greg Spring set the bar over in the Jook Joint, before Donal Dineen sees out the night in superb, hands-in-the-air style at the prettiest stage of them all, Wonderlust, snug in the walled gardens of this castle venue. LM

Under the corona of the Body and Soul main stage, a wooden dome that erupts into flags like the rays of sunrise, a bass-led song surges, thumps and resolves in a thunder of ringing guitars and skittering beats. “That’s a song about being brilliant at everything,” says Tom Vek, the London musician who has long been promiscuous with styles.

It’s an endearing feint, of course (Vek’s appeal is being erratic) but he’s certainly struck an appropriate tone for a festival designed to channel positivity. Luck, his third album in ten years, is an uneven offering, the consequence of a rock musician migrating to dance and then retreading his footsteps. Yet, sitting in the grassy amphitheatre, lolling in Saturday sunshine and curiosity, the crowd take him as he comes. His three-piece pursue a loose groove on Pushing Your Luck, become taught with propulsion for A Chore and open throttle for a breakneck I Ain’t Saying my Goodbyes. They’re drawn together by the sheer force of his personality; Vek is having huge fun and, after Darkside’s tantric proggy pretensions the night before, (gratifications endlessly delayed) mainstage élan becomes more infectious. Peter Crawley

It seems like a while since Richie Egan has been playing live, and when Jape take to the stage it’s with a slew of new material – a brave choice for a 6pm slot on the main stage of a Saturday afternoon. Luckily, and perhaps predictably, it’s terrific, fresh music, laden with hooks and riffs, bass grooves and drum kicks, and subtle, sampled guitar stabs – if this is a further development in Jape, towards something of a cleaner, sparer sound, built up in layer after layer of feint and jab, it’s very welcome indeed.

Towards the end of the set, he takes a brilliant circular route into Floating, before rolling that track into Todd Terje’s Inspector Norse. How do you top that? Drag Conor O’Brien on for a duet. Sublime, smart and, a rare thing this, a huge amount of fun. LM

John Grant isn’t someone you’d necessarily associate with a tremendous amount of fun – but in a chat with Siobhan Kane at the Wonderlust stage he takes a stroll down a few musical highlights, and also manages to get across with great wit and intelligence what a warm soul he is. This, though, is just the amuse bouche for a full, meaty live band show on the main stage after Jape – and what a show it is.

It’s not news that Grant’s songs are superbly crafted, heavy on emotion and pathos. The revelation here is that live, these songs simply soar, Grant building the dynamics with a superb band pushing and pulling each beat and punch. It’s a two for one with Conor O’Brien, repeating a duetting trick they’ve pulled before on Glacier. But this is a track always with hearing, with two contrasting singers of such calibre. This is the kind of set that festival memories tend to cluster around for months afterwards. Superb. LM

As the sun sets on the year’s longest day, Gary Numan is ready to usher in its shortest night. By cunning arrangement with the sound guys, perhaps, Numan’s band seem to have diverted every decibel of the world’s store in amplification to his industrial synth rock. At one point, presumably from shock, the system even breaks down. It’s a break just long enough to let you appreciate that Numan – the eternal moody adolescent, dressed in a brooding conspiracy of blacks – and the best of his music are utterly, eerily ageless. In the icy synth wash and crunching guitar riff of Cars, or the seam ripping distortion of Sacrifice lie his prophecies of a corroded dystopian future. Are Friends Electric?, here beginning with a deceptively soft, reverberant piano, makes it still seem like a darkly delicious dream. PC

Technical glitches, and a seemingly dodgy cable, delay The Field’s set, and even when it finally gets underway, Axel Willner is in no rush to hurry things along. He builds up his tracks at an almost glacial pace, huge rushes of low end pulsing through the Midnight Circus tent, adding a layer one slow part at a time, making adjustments in increments. It’s heavy and hard, but lacks dynamic and

momentum. When the drops come, the roll up is slow, and big as a mountain. It’s dark and heavy; but some people like their thunder that way. LM

Pity the poor group at a festival with a fantastic back catalogue, an army of fans and a relatively new record to promote. After the tectonic-shifting opener, Utopia, whose dreamy drifts, cinematic vistas and operatic arias are still sound startling 14 years since they first emerged, Alison Goldfrapp must persuade us that last year’s downtrodden Tales of Us is a worthy successor. Yet no-one seems more relieved when they finish with their new material than Goldfrapp. “I’m freezing,” she informs us, not for the first time, as though the set list can generate no heat. It’s remarkable to see the subsequent change: earlier she clung to the microphone as though it was holding her upright; now she slinks into power poses to soar through Lovely Head, Train and Strict Machine, each surging in quick succession. It takes a while, but Goldfrapp can still raise the temperature. PC

The Field are followed by Mount Kimbie, the electro vibe kept humming along in the Midnight Circus, although here it’s with a much more jagged, post-rock edge. It trucks along smoothly enough, but again feels like it’s lacking dynamic build and release. Too much electro swaps sturm and drang for subtlety and guile – and coming before the dizzying peaks and canyon-like grooves of Jon Hopkins, the limitations are probably thrown into a harsher relief. LM

If the uniquely soulful composer and electronicist Jon Hopkins was the revelation of last year’s festival, hot on the heel of his sublime release, Immunity, the jam-packed Midnight Circus – long after midnight – is testament that word has travelled far and wide. In performance, Hopkins uses four Kaoss pads, tactile and engagingly imperfect controllers, to manipulate and colour the elements of his compositions. Already uncommonly textured as techno goes, it means he can let a solitary piano punch cleanly through Breathe This Air, then scuzz up the bass for bone-crunching, visceral effect. Accompanying videos - entracing and unsettling - may give the impression that it’s all an exercise in button pushing, but the immense excitement of We Disappear or Open Eye Signal is enhanced by the live performance’s appealingly rough edges: a divine suite that swerves so tantalisingly close to chaos. PC