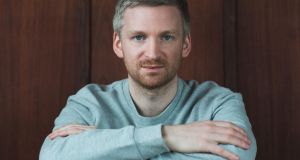 Ólafur Arnalds: “Ultimately, I have to fight for my right to do what I want to do”

There are various reasons why Icelandic musicians don’t bother to fit into any defined or assigned role, says Ólafur Arnalds, and they include the following: there isn’t exactly what you’d call a music industry infrastructure in the country; the musician is aware that, at best, record sales won’t amount to more than a few hundred; and they are probably making ends meet with a full or part-time job. These are what, he contends, form an Icelandic musician’s fearlessness when it comes to leapfrogging over creative barriers.

Arnalds has come quite a way from the hardcore punk bands he first played with. The years may have passed quickly, but there is no apparent hurry to the soft-spoken, expressive musician. We are talking in a quayside cafe/venue in Reykjavik in the lead-up to the release of his fourth studio album, re:member. Familiar to those who cruise gently along chilly electronic and neo-classical roads, there is a difference to this work that marks it out as a departure for the musician. He talks about how he has integrated customised software (titled Stratus) into the creation of his new music (“it’s an algorithmic generator that takes sensored input from what I do on one piano, changes it up and triggers patterns that two other pianos play”) and of how its non-repetitive, random results spark changes.

“When you play in an improvisation group,” he illustrates, “it is when you hear something unexpected that is the opportunity for a reaction, to take what you have just heard into something you can develop further.”

The need to break barriers has always been there, he affirms. “The punk in me always wanted to do it. And for me, at the start, it was very much punk music that inspired me. Nirvana was my favourite band, and then I got into the punk hardcore scene, by going on Napster. Because of slow internet here, you waited half a day for an MP3 download that sounded horrible, and so the supply of tracks, or songs, was limited. Yet you would listen to them over and over again, and that becomes your whole perspective. It’s a small perspective, of course, and so the music you write in those early days is limited because you are just copying one of these songs.”

The development and change of musical direction for Arnalds can be attributed to nothing less than advances in technology. As Internet speed in Iceland increased, he began to watch movies on his computer screen, and take an interest in their soundtracks.

“One of the first movies that really impacted on me was Requiem for a Dream. And the soundtracks to other, bigger-budget Hollywood films kept informing my ideas. I was always playing music on the side, but even when I was writing whilst in the punk bands I would often figure out the tune on piano first. So that element was always there, and my interest in analysing chord structure was there, too – I wasn’t just playing riffs, but thinking a little bit deeper about things. And then from listening to film scores my interest developed in using classical instrumentation.”

There was little else Arnalds wanted to do with his life. At the age of 16, he built his own (then-rudimentary) recording studio and developed such a hobby into full-time work as a sound engineer, which he says he would still be doing if music hadn’t come along and changed the course of his life. He had, he says with serious, calm emphasis, no dreams of becoming either a musician or a frontperson of any shape.

I didn’t think there was an audience for the music. When I saw the long queues outside the venues I was startled

“I was a producer, simple as that, and I was recording many bands from Iceland’s underground scene, producing pop songs, working on my own music on the side. I had never really meant for the music to go anywhere. I just put a couple of tracks on MySpace, and then it took off from there.”

What happened next took Arnalds from his recording studio to the world’s stages. He is modest, almost inhibited when he relates his sharp rise in profile.

“I didn’t think there was an audience for the music. In those days – this is about 10 years ago – there was no real outlet for music in Iceland. There was nothing like Spotify, only radio – and my music is not radio-friendly, as it falls between the two areas of classical and electronic. There was also no sense of how many people were listening to my music, what with illegal downloads and sharing. When I first toured and saw the long queues outside the venues I was startled.”

From 2012, Arnalds has seen an even sharper growth in popularity. Admittedly, his name doesn’t necessarily trip off the tongue, but through a partnership with Mercury Classics (a division of Universal Records) and music featured in films such as The Hunger Games, and television shows (Broadchurch, for which he won a Best Original Music Bafta award; Philip K Dick’s Electric Dreams), he has arrived at a point where he can sell out theatres across Europe. It is, he agrees, a long way from playing drums in hardcore punk bands. As is the production set-up for the shows he is bringing to Ireland.

“Oh, it’s a bit like a travelling circus,” he reveals, half-joking, as he outlines the variety of instrumentation on stage: three pianos, string quartet, drummer, percussionist, and electronics. The generative software that Arnalds uses to control the pianos also regulates the lighting system. For such calm music, there seems to be a lot going on, I suggest.

“I can see why some musicians strip it down,” he allows, “and I have these moments as well, but there comes a point where you have to put energy into it. It gets easier when you have more people around you for the bigger productions, not having to worry about carrying yet another case. This is the first time I’m doing a production like this, so we can do what we think will work in a live setting and be fully relaxed about the budget.”

And yet, says Arnalds in a moment of even-tempered inner conflict, “it seems so easy just to travel with a piano.” Sometimes, he admits, he gets jealous of other musicians touring with such light baggage, “but I did a solo tour once, and you know what? I was so bored! It needs to be difficult.

“Ultimately, I have to fight for my right to do what I want to do. If you don’t fight for it, then it isn’t going to be rewarding. Now that the shows have become easier to do with a bigger crew and more musicians. I am, of course, making it ridiculously complicated.”

The former winner of a national song contest, Sara Pétursdóttir signed to Columbia/RCA Records last year and is currently prepping her debut album. By the sound of early tracks we have heard, numerous Spotify charts will be hers for the taking.

A founding member of the multi-limbed hip-hop unit Reykjavíkurdætur, Special-K is the latest solo project of Katrín Helga Andrésdóttir. Fusing day-glo visual elements with songs about what she terms “everyday millennials”, Katrín’s lyrics are especially unfiltered: “I attract douchebags, so I know you must be strange” is one such gem.

Head-shaving, rape, murder. Atrocities against women in the ‘Tan War’
6