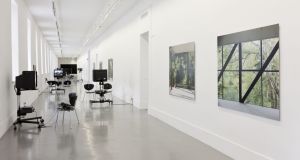 Imma: New Sexual Lifestyles, by Gerard Byrne, was at the Irish Museum of Modern Art in 2003

Artists such as Andy Warhol and Richard Hamilton are noted for engaging with popular culture. It’s often hard to decide if they were simply fascinated by mass media or adopted a critical stance to it. A younger generation of artists maintain this interest, particularly in response to the speed and expanse of new media in everyday life.

Gerard Byrne is one such artist. New Sexual Lifestyles, which was shown at the Irish Museum of Modern Art in 2003, marked a significant point in his career, as he shifted towards the moving image and was recognised on an international stage.

The exhibition consisted of seven big photographs and three television monitors. Segments from a digital video work were shown across the monitors in different sequences.

Playboy also gave space to emerging writers and contained interviews with Jane Fonda, Herbert Marcuse and President Jimmy Carter, among others. This suggests that the magazine occupied an accepted, if contested, place in American popular culture at the time. Still, it was banned in Ireland until the late 1980s, readily available only if you had the know-how.

Byrne plucks this material from obscurity and restages the discussion in a manner at odds with its original context. He uses Irish rather than American actors. The actors wear contemporary clothes, so Byrne purposely avoids a period reconstruction. They stick close to the original text, so their flow is stilted. Their conversation is played out with gravitas.

They are located in Goulding House, a summer retreat in Co Wicklow designed by Scott Tallon Walker in 1972. The work opens gaps between the period artefact and its reconstruction, so that the viewer perceives the piece as pure artifice.

The photographs frame the video work. A black-and-white photograph documents the magazine piece. Another shows Goulding’s summer idyll jutting into the landscape.

The colour photographs are carefully framed interior shots from Goulding House. They integrate the viewer more consciously into the scene where the reconstructed discussion took place.

The photographs contrast the crisp industrial lines of the modernist structure with the rich, irregular foliage of the landscape. There is also a contrast between the competitive posturing of the panellists and the pastoral repose, between this lowbrow facet of the sexual revolution and the utopian ideals of high-modernist architecture.

The viewer is encouraged to assess persistent tensions between perceived pasts and present being. The mass media is said to construct memory more by forgetting than by recollection. It feeds on redundancy in the selective production of the ever new. Byrne reaches for an abandoned archive of popular culture as a way to haunt the popular imagination.

If a media event of the past now appears slightly ludicrous and obsolete, it nonetheless had a degree of credibility at the time. The same might be said for present media spectacles whetting our appetites and helping to shape our aspirations and desires. By making strange these events, our present constructs are equally susceptible to critical scrutiny.