The poet had to endure the anxieties and resentments of living with tuberculosis. His philosophical third collection expresses the realities of life in all its imperfection 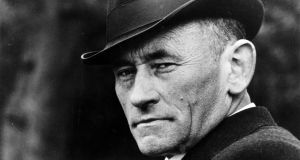 When Seán Ó Ríordáin published Línte Liombó, his third volume of poetry, in 1971, he was already a literary figure. He had taken early retirement, on health grounds, from his job as a clerk in the motor-tax division of Cork Corporation in 1965, and his column in The Irish Times, which between 1968 and 1977 offered commentary on political as well as cultural and literary and linguistic issues, was attracting a regular readership.

He was looked up to as an innovative father figure by a new generation of Irish-language poets, the “Innti generation”, closely associated with Cork and its university.

This slim collection is closer to Ó Ríordáin’s first volume, Eireaball Spideoige, from 1952, than to his second, Brosna, from 1964, in that the focus throughout is on philosophical questions of existence and mortality, typically from the perspective of the vulnerable and the marginalised.

The collection contains his most overtly political poem, Ní Ceadmhach Neamhshuim, where the empathetic stance of his earlier work is reiterated, and extended from the tiny and the local to the global and the cosmic: “Níl áit ar fuaid na cruinne / Nach ann a saolaíodh sinne.” (“There is no place in the universe / That is not our birthplace.”)

Ó Ríordáin’s sense of a mixed cultural identity, and his relationship with Irish as a consciously chosen medium of literary expression, were influenced by his family background (his father and his paternal grandparents were Irish speakers); his very close relationship with his mother, who spoke only English; and the family’s move in 1932 from the bilingual rural milieu of Baile Bhúirne, where he was born in 1916, to the English-speaking environment of Inis Cara, on the outskirts of Cork city, where he lived for the rest of his life.

His biographer Seán Ó Coileáin identifies the departure from Baile Bhúirne, Ó Ríordáin’s contraction of tuberculosis, in 1938, and the death of his mother, in 1945, as the defining events of his life.

A room was added to the house in Inis Cara under special provisions for TB sufferers, and it was there on January 1st, 1940, that Ó Ríordáin, whose father had died of TB when Seán was 10, began the diary that he wrote regularly until a few days before his death, in 1977. The journal, which often served as raw material for poems, provides a detailed, moving and often disturbing account of a life of isolation, physical debilitation and sexual frustration.

Ó Ríordáin’s complex spirituality and relentless self-scrutiny stemmed in large part from the anxieties and resentments induced by his alienating and stigmatising physical condition.

The best-known poem in Eireaball Spideoige, Saoirse, dramatises the dilemma of choosing between social conformity and orthodox religious belief on the one hand and the terrors of absolute human freedom on the other.

Most of the poems in Línte Liombó fit Ó Ríordáin’s aesthetic as outlined in the introduction to Eireaball Spideoige: poetry as concerned with the essence of things, whether a dog’s capacity to provide companionship and elicit emotion from its master (Tar Éis Dom É Chur go Tigh na nGadhar), the music of a region captured in its dialect (Ceol Ceantair), the questions of heredity raised when one recognises the eyes of a loved one in her young son (Súile Donna) or the limitations of the self as resource (Tionlacan na nÓinseach, Cló, Mise).

The collection contains only one long(ish) poem, Toil, which is an extended and unresolved contemplation on the limitations of human volition and autonomy, comparable with the earlier Saoirse, but much more accepting of the human condition as incurably defective. The self-scrutiny of his earlier work is still there, but there is more light than darkness in the imagery, as the imperative persists to bear witness and to give expression to the realities of human life in all its complexity and imperfection.

You can read more about Seán Ó Ríordáin in the Royal Irish Academy’s Dictionary of Irish Biography; ria.ie

Are the political parties tuned in to the needs of musicians?
4