Modern Ireland in 100 Artworks: 1969 – The Táin, by Thomas Kinsella and Louis le Brocquy

The poet and the artist collaborated to produce a blunt, muscular reimagining of the Ulster legend of the Cooley cattle raid 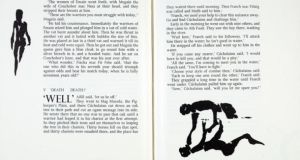 High art: part of The Táin, by Thomas Kinsella and Louis le Brocquy 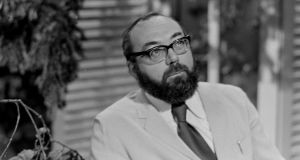 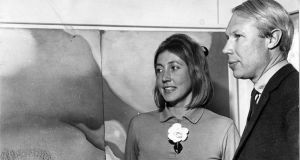 One of the odder effects of the explosion of youth culture in the 1960s and early 1970s was what might be called a second Celtic Revival in Ireland. In the search for an alternative, anti-establishment aesthetic, the notion of a pre-Christian “Celtic” world promised a kind of authenticity that dovetailed with the international counterculture. It manifested itself in everything from jewellery to the graphic art of Jim Fitzpatrick (see 1968) to the invention of “Celtic rock”.

This interest in turn gave an unexpectedly contemporary energy to one of the most prestigious high-art projects of the era: the collaboration between the poet Thomas Kinsella and the painter Louis le Brocquy (see 1951) on a translation of the old Irish epic Táin Bó Cúailnge (The Cattle Raid of Cooley).

The Táin is the centrepiece of the Ulster Cycle of legends, describing the mythic conflict that erupts when Queen Medb of Connacht invades Ulster to capture its most prized treasure, a great brown bull. Ulster is defended by its youthful champion, Cúchulainn.

By 1969, Cúchulainn’s death scene from The Táin had long been a familiar image through Oliver Sheppard’s statue at the GPO (see 1935). Augusta Gregory produced a fine prose version in 1902, but a full translation was fraught with difficulty.

Although it refers back to a pre-Christian world and an aristocratic warrior culture that seems almost like that of Homer’s Greece, The Táin was written down much later. Kinsella had to collate two different – and far from coherent – versions from the 12th and 14th centuries. Frank O’Connor described it as a “simply appalling text . . . endlessly scribbled over”. Adding to the challenge, the story is told in a mix of prose and verse.

Kinsella’s triumph was to simultaneously exploit and overcome these difficulties. His composite text brings great clarity to the story while subtly drawing on the similarity of the episodic structure and shifts of language to modernist literature. His plain, elegant, rhythmic translation retains a unity even as it moves from poetry to prose and through a series of epic set pieces.

The Táin is at once heroic and blunt about sex and bodily functions. There is no twilight in Kinsella’s Celtic world. The style was hard won: Kinsella first began the translation in 1954, as a project for his friend Liam Miller’s Dolmen Press.

In working closely with Kinsella and Miller, le Brocquy was conscious that “any descriptive precision in the depiction of Medb, Cúchulainn or a first century charioteer would disturb imaginative reality”. His own style, like Kinsella’s, would have to be “as impersonal as possible”.

To achieve an imaginative energy without distracting detail, le Brocquy developed his inspired “blot” technique for the Táin illustrations. It was the perfect solution to the artist’s search. Le Brocquy found a modernist language that enabled the expression of a historical-mythological narrative, at a time when such narratives were past their sell-by date in an art-critical climate dedicated to abstraction. His images complement Kinsella’s text without competing with it. As le Brocquy put it, “it is as shadows thrown by the text that they derive their substance.”

Out of hundreds of drawings, 89 were used in the publication. But the approach le Brocquy came up with for the small scale of a book was perfectly suited to reproduction on a grand scale, a quality that he exploited thoroughly through his huge Táin tapestries, which went on to adorn public buildings from RTÉ to government offices. Through them, some echoes of the 1960s counterculture still sound in official settings.