The painting, influenced by ‘Guernica’, secured his place in international modernism 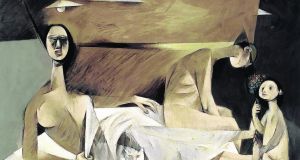 When Louis le Brocquy’s painting Travelling Woman with Newspaper, from 1948, was auctioned for almost £1.2 million, in 2000, even Irish people who despise sale prices as indicators of aesthetic value were pleased to see a living Irish artist break through the million-pound barrier on the international market.

It was not always so. In 1952 a more famous painting by le Brocquy, A Family, was offered as a gift to the penniless Hugh Lane Municipal Gallery, only to be rejected. Two years after the 2000 auction the businessman Lochlann Quinn and his wife, Brenda, bought A Family privately for €2.7 million and gave it to the National Gallery of Ireland under the State’s heritage donation scheme. How those private patrons, refused 50 years earlier, must have smiled.

9 Covid-19: Self-isolation rules to be eased for healthcare workers

18 Behind Her Eyes: Sarah Pinborough on writing the Eve Hewson hit and its ‘WTF’ ending

19 One-quarter of TDs are property investors or landowners

20 Caffeine hit: The rise and rise of Irish coffee culture

21 Megan Nolan: At 15, I betrayed my boyfriend under the influence of the little alcohol it took

24 Deaths of three brothers near Mitchelstown investigated by gardaí

25 Couple in 80s have bankruptcy extended by five years

26 ‘Defund Paw Patrol’: Why protesters have turned against a kids’ cartoon

27 Moses Farrow: ‘I felt inherently like I was a bad kid. The abuse at home reinforced that’

38 Jennifer O’Connell: The Government doesn’t trust us and it’s mutual