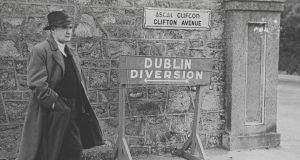 In a State that was more hospitable to its writers, Brian Ó Nualláin – aka Flann O’Brien and Myles na gCopaleen – might have become something like an official artist. He was a considerable Gaelic scholar in a State whose main cultural project was the revival of Gaelic, a man of broadly conservative disposition in a broadly conservative State, and, initially at least, a diligent official in the Civil Service.

The need to support his brothers and sisters after the early death of their father, a customs and excise official, meant that, unlike many of his contemporaries, he was not free to opt for exile. Yet the combination of official indifference and his own antic spirit saved him from such a fate.

In 1941, when he published An Béal Bocht, his Irish-language masterpiece, Ó Nualláin was only 30, but he had already published (as Flann O’Brien) one of the great prose comedies of the English language, At Swim-Two-Birds, and written its equally original successor, The Third Policeman. He had also begun what would become the famous Cruiskeen Lawn column in The Irish Times.

Yet his literary career was not a success. At Swim-Two-Birds, though admired by James Joyce and Graham Greene, sold very few copies, and he could not find a publisher for The Third Policeman, which was not published until after his untimely death, in 1966.

He can have had few illusions that An Béal Bocht, published only in Irish, would have a wide readership.

He did know, however, that those readers would be steeped in the tradition of Gaeltacht autobiographies inaugurated by Tomás Ó Criomhtháin’s An tOileánach (the entry for 1929 in this series) and that this would give him the opportunity to give his dazzling gift for parody full rein. Ó Criomhtháin’s book was an object of admiration and fascination for Ó Nualláin, who realised that its highly recognisable style could be exploited to great comic effect. An Béal Bocht parodies the book cover, the editor’s preface, the map and title page, the chapter titles and descriptions, the seal-hunting episode, references to the weather, the schoolmaster, visits to Dingle. The subtitle to An Béal Bocht, An Milleánach – The Fault-Finding One or The One from the Land of Fault-Finding – is a pun on An tOileánach. The preface of An Béal Bocht echoes Pádraig Ó Siochfhradha’s preface to An tOileánach, where the book’s claim to be an authentic account of a life faithfully recorded is followed with an acknowledgment that parts of the narrative were omitted because of the unsuitability of their content.

Yet An Béal Bocht is more than a very funny parody. It is also a sharp social and cultural critique. It deflates the image of the Gael portrayed in Gaeltacht autobiography by exaggerating scenes of poverty and adversity and inverting images of stoic heroism and saintly tolerance. Far from being heroic, Bónapart Ó Cúnasa, the central character, is presented as miserable, degenerate, ignorant and lacking moral strength or vitality.

The failure of the community of Corca Dhorcha to adhere to the “prescribed script”, as evidenced in their drunkenness, thievery and collusion in the processes of Anglicisation that as Gaels they should be resisting, challenges readers’ expectations and, through the power of laughter, forces a radical reinterpretation of the relationship between cultural ideology and representation. The reality of the State’s failure to sustain viable Gaeltacht communities pokes through Ó Nualláin’s savagely brilliant satire.

You can read more about Myles na gCopaleen in the Royal Irish Academy’s Dictionary of Irish Biography; ria.ie