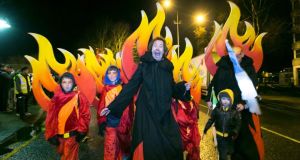 The Limerick City of Culture NYE Pageant. Limerick’s local authority is not facing any financial losses following the city’s year as national City of Culture, according to county council officials. Photograph: Brian Gavin/Press 22

Limerick’s local authority is not facing any financial losses following the city’s year as national City of Culture, the chief executive of Limerick City and County Council has stated.

Speaking at a special meeting of the local authority to discuss an overview of the year, Conn Murray confirmed the expected budget of €10 million was spent over the 12-month programme, which received €6 million in Government funding.

He said final figures would be “fully available” when all of the events had been taken on board at the end of the year.

Mr Murray insisted the local authority, which absorbed some of the cost along with private and philanthropic support, is not facing any financial shortfall.

“The programme was going to cost more than the €6 million, so therefore there was always going to be a requirement in terms of philanthropic support and sponsorship and, from a local authority perspective, support from our staff and that’s the type of support we provided.”

In his presentation to the council Mike Fitzpatrick, who was brought in to lead the City of Culture programme following a number of high profile resignations, stressed the importance of Limerick putting forward a strong bid for European Capital of Culture 2020.

Mr Fitzpatrick said this would include the involvement of other stakeholders and the establishment of a cultural strategy proposal from 2015-2020 using models like Lille, Glasgow and Liverpool.

When asked if he would be the person to lead Limerick’s bid, the head of Limerick School of Art and Design, who was seconded to the City of Culture programme and is due to return to the college in January, replied: “I have commitments and I have to be very careful how I answer that question, but I would be very happy to have some involvement in the overall thing.” Mr Fitzpatrick said it was important not to lose momentum, and said the bidding process would be starting in the new year. “People have experience so we don’t want to lose that. [We want to] take that valuable experience and apply it.”

Mr Murray said the local authority would be coming back “early in the new year” to see how it could proceed with discussions on how to bid for European Capital of Culture 2020.

Where did it all go wrong for Johnny Depp?
6

Go to Auschwitz, buy a trinket: Howard Jacobson on how we treat the Holocaust
8

Love Island: It’s deranged. What am I actually watching?
9

Taylor Swift: Why is it so difficult to support her?
10