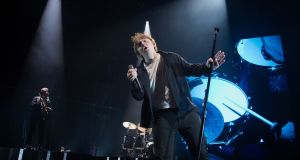 Lewis Capaldi: ‘I always get tons of messages from people online who have said they want to come to my shows but can’t because they’re struggling massively with anxiety.’ Photograph: David Wolff-Patrick/Redferns

Gigs, concerts, shows, plays . . . they can be transformative, almost magical events. They transport you to another world where you can be moved by and utterly immersed in the performance before you.

They can also be entirely overwhelming, as the performance and environment consume the audience members, sending some into sensory overload and leaving them feeling at the very least uneasy, if not much worse.

LIVELIVE is an initiative developed by Music and You and Lewis Capaldi which seeks to address this potential issue, providing assistance for concert-goers on the UK and Irish legs of Capaldi’s upcoming tour.

Music and You was set up in 2017 by Jack Williamson, a London-born music industry aficionado. Having worked in the industry in many capacities since 2001, a personal bereavement due to suicide made Williamson reassess his career. He sought to combine his love of music with helping those suffering from poor mental health, and looked to see “what we could do to support people more in the music industry, and what that would look like”.

The company works with artists as well as music organisations, and has a collective of coaches, counsellors, wellness professionals, personal trainers and vocal coaches across the UK, Ireland and now the US as it continues to expand.

Through his friendship with Capaldi’s manager, Ryan Walter, Williamson and Walter came together with Capaldi to try to address the idea of anxiety at gigs.

“I always get tons of messages from people online who have said they want to come to my shows but can’t because they’re struggling massively with anxiety or are just generally afraid they will have a panic attack during the show,” says Capaldi. “I really wanted to put something in place to help those people feel comfortable and offer them support to allow them to experience the shows.”

The initiative seeks to ensure that everyone who wants to attend a show can do so, without their anxiety preventing them. “I just hate to feel that anyone’s anxiety is making them miss out on anything they want to do and LIVELIVE is my attempt at helping make these shows enjoyable for as many of those people who have been supporting this journey for me,” says Capaldi.

LIVELIVE has many supports which concert-goers can avail of at the performance. Fans can get help from a qualified team at the venue before, during and after the show. There will also be designated help points throughout the venue for anyone struggling emotionally, a signposted safe space for anyone who needs time out, and a gig buddy system for fans travelling to the show alone.

They can meet at a designated point before doors open, before the show starts and after the show to connect with others and travel home safely together. There will also be a helpline that fans can contact before, during or after.

Williamson is passionate about the project, and believes this is just the jumping-off point. “I think it has to start somewhere and the fact that Lewis was so pioneering and able to put his head above the threshold and acknowledge that this was a genuine requirement for some people. It was like, ‘how can we make this inclusive for everyone?’ rather than exclusive those who don’t suffer from poor mental health. Hopefully it will spread to other artists and venues and become commonplace in venues and organisations.”

According to Williamson, the scheme is open to anybody or any organisation. He acknowledges that certain people may be more receptive than others, citing the example of Ariana Grande fans and their awareness of mental health issues and PTSD following the terrorist attack at her Manchester concert.

He is aware that “at other concerts concert-goers may be less inclined, given the different dynamics of the audience attending, but we would love it to be available to anyone (at an event) no matter how many people engage with the service.”

At present Capaldi is the only artist taking part in LIVELIVE, with his ten shows across the UK and Ireland acting as a trial run of sorts. he’s playing in Dublin’s 3Arena on March 8th and 9th, where fans can avail of the resources LIVELIVE have made available. The materials required for LIVELIVE will move with Capaldi as the tour moves from venue to venue. It is hoped that eventually both artists and venues will become involved with the programme.

“Our hope is that more and more artists will engage with this, or venues will incorporate it as part of their offering alongside disabled access support, which is on offer across pretty much every venue across the world now,” explains Williamson.

“We hope that mental health support will then become the next stage in that support for concert-goers and attendees across the world, be it at a concert, at a theatre show, a festival, wherever .”

While the initiative started with a UK-based artist, there has been interest from all over, says Williamson. “There has been quite a lot from US artists. It’s definitely across the spectrum, it’s not just any one genre or certain age demographics, it’s across all genres and age ranges, which is encouraging to see.”

What exactly does LIVELIVE offer?

Safe Space: A place for fans to take time out if they are suffering from anxiety and/or panic attacks

Buddy System: Fans (particularly those travelling alone) can meet at a designated point before doors open, before the show starts and after the show to connect with other fans and travel home safely together

Helpline: For fans to contact before, during or after the show

Help Desk: Found in the LIVELIVE Zone to answer any enquiries. The help desk also provides information about mental health and the initiative itself

At school with a serial killer: growing up with Jeffrey Dahmer
9