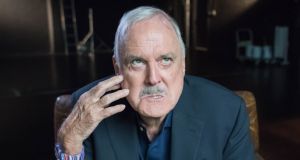 Near the top of the list of people who should never have been let near Twitter stands John Cleese. Before social media he was regarded, in Ireland as much as everywhere else, as a comedy colossus. From Monty Python’s dead-parrot sketch and Ministry of Funny Walks to Fawlty Towers, he was outrageous, hilarious and absurdist. Even his political background as a campaigner for the thoroughly inoffensive Liberal Democrats suggests a comic beyond reproach.

Yes, we may have experienced the very occasional twinge thinking back to Fawlty Towers and David Kelly’s bumbling Irish builder, O’Reilly. But it seemed almost like a false memory – the mere shadow of a blot on the CV of a titan of chuckles.

9 Before you buy an electric vehicle, ask: Will I drive it enough to make it eco-friendly?

13 Finn McRedmond: Wokeness is dying, another victim of the pandemic

16 Irish Times view on the restless state of unionism

18 Davy board to search for other potential cases of wrongdoing

19 I, Tonya reveals a deeper truth than Harding’s level of guilt

21 Long Covid in children: New data is cause for concern, scientists say

29 Joey Carbery on the Munster bench again for Connacht clash

35 ‘My husband is unemployed. Where will he go if I leave him for my business partner?’