In a lot of ways, RTÉ's Twink tribute depicts her as a whistleblower

Patrick Freyne: Twink seems to have her own studio audience in her house 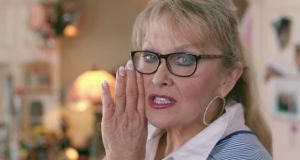 ’We’ve coped with 800 years of occupation, famine and popery but this, this satirical song about PAYE taxpayers, sung to the tune of 'YMCA' by Twink, Dermot Morgan and Larry Gogan, this more than makes up for that.’ Photograph: RTÉ

Last weekend RTÉ1 broadcast an all Twink clip show called Twinkling Through the Years. In it, Twink, the woman born Adele King, stands bespectacled and wearing an apron in her kitchen talking us through clips of her RTÉ appearances through the decades.

It essentially puts the viewers in the William Holden role in Sunset Boulevard with Twink as Norma Desmond/Gloria Swanson, rolling silent films on a projector and saying: “I’m still big, it’s the pictures that got small.”

Now, to clarify – this comparison is meant as no slight on Twink. I think Billy Wilder got the tone in that film all wrong.

There’s a moment halfway through Sunset Boulevard where William Holden spies on Desmond/Swanson when she’s holding a funeral for her pet monkey and I have to say, if I am ever in a position to host a monkey funeral with my butler, Erich Von Stroheim, I will consider it a life well lived.

I will, in fact, tweet about it using the hashtag “livingmybestlife” and fill Instagram with pictures of my unreconstructed ape grief.

Twink is totally the sort of person I can see burying a monkey with Erich Von Stroheim. She was, after all, at the heart of a heartbreaking news saga a few years ago in which her dog, the strikingly named Teddy Bear, was dognapped.

Twink and her ursine-canine pal were thankfully reunited with help from sometime frenemy Linda Martin, who was, Wikipedia tells me, “a powerful woman in the dog world”.

This is a true story and the fact that it isn’t the subject of a television drama starring Meryl Streep and Glenn Close is an indictment of the Irish entertainment industry.

Twinkling Through the Years makes up for this a little. It starts with Twink standing in a kitchen that the bank tried to take from her, the mad fools, and near a phone with a sign above it saying “zip up your mickey”.

This is a reference to a leaked answering machine message to her ex-husband which once made it into all the newspapers, except probably this one, which is why I’m adjusting the record today. The event is referenced in Twinkling Through the Years because Twink is a legend.

On this programme she is also apparently baking a cake – because she is Twink and she can do what she likes – and she is inconsistently accompanied by audience laughter. This suggests that the woman herself either arrived on earth with canned laughter umbilically attached or she has her own studio audience in her house. Neither option would surprise me.

'This feels right,' we’ll think. 'I always knew it would end like this'

Twink is a creature of the light entertainment ecosystem and the programmes in which she has appeared don’t always survive in the historical record. Consequently this is a gloriously back-to-basics view of the Irish television timeline that rides roughshod over any revisionist history that depicts RTÉ’s output as all Radharc documentaries, Prime Time exposes and prestige dramas like Love/Hate. In a lot of ways, this is Twink as RTÉ whistleblower.

So we see her vying to represent Ireland in the Eurovision, twice. We see her as part of Maxi, Dick and Twink, a pop group/political movement that was once more important to the Irish people than the Beatles and, I believe, splintered off from Cumann na nGaedheal. We see them dressed in school uniforms singing Gilbert and Sullivan.

We see Twink wearing cornrows crooning alongside local geological legend Dickie Rock. We see her dressed up as Abba alongside Gay Byrne and Mike Murphy, because in some universe that was going to happen.

We see her in the middle of a huge concert presenting an elderly Perry Como with a newborn baby, some sort of Abrahamic offering to the gods of show business, perhaps (luckily Como isn’t hungry and just sings to it). The best clips, however, are those Candid Camera-cogging outtakes from the Live Mike TV show in which Twink and Mike Murphy play pranks on a desperate people already on their last nerve thanks to living in a recessionary theocracy.

This, in a way, is the subtext of the whole programme: the steely resolve of the Irish people. We see glimpses of studio audiences in the 1970s, the 1980s and the 1990s. These studio audiences, now long dead and lost to history, probably deserve their own show.

I’d certainly watch a whole programme devoted to cameras panning across their doomed faces. In studio after studio, they sit, looking hollow-eyed, haunted and entertained. “We’ve coped with 800 years of occupation, famine and popery,” they seem to say through the mists of time, “but this, this satirical song about PAYE tax payers, sung to the tune of YMCA by Twink, Dermot Morgan and Larry Gogan while dressed as the Village People, this more than makes up for that”.

The programme takes a few idiosyncratic turns. There’s a bit in which Twink and actor Jonathan Ryan reprise their roles as salt-of-the-earth cleaning ladies Bernie and Rose Violet now, apparently, working in Twink’s house. This enables Twink to have a conversation with herself which, again, seems like something she might do. And then she introduces her special guest, the saxophonist Paddy Cole, and presents him with a cardboard cake which she has been pretending to bake.

This is a multitiered object featuring embedded photos, the Monaghan colours and oddly paganistic figurines playing saxophone. Cole is thrilled. Behind them on a table, uncommented upon, sit an array of different cardboard cakes and dolls and strange paper mache heads. What’s going on there? I suspect its best we never know.

Anyway, Twinkling Through the Years feels delightfully apocalyptic, like it might very well be the last television show ever. I can imagine this. I can imagine a day when we turn on the television to find an automatic emergency broadcast on all stations but one, and that will be the one that has Twink on it, in her kitchen, making a cake. “This feels right,” we’ll think. “I always knew it would end like this.”

For some deeper context about the world depicted in Twinkling Through the Years, I watch Imagine . . . Edna O’Brien: Fearful and Fearless (BBC1) which details how one of our best writers had to leave the country in order to write about the inner lives of Irish women and was condemned for it nonetheless and continued to do it anyway.

Even if this documentary didn’t feature fascinating historical footage, endorsements from Eimear McBride or readings from Fiona Shaw, I could still listen to O’Brien talk for hours. Here she is, back in an early interview, talking about one of the few benefits of Irish repression: “If somebody was brought up in a free country there wouldn’t be the same urgency to write or to scream.”