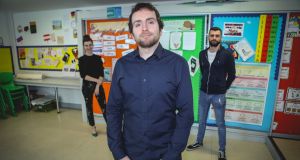 Home School Hub is a soothing, calming and upbeat presence in a world gone mad

“When I clap once, you take one step forward,” says the nice man on the television.

When he claps, I take a step forward.

“When I clap twice, you take two steps backwards,” says the man.

When he claps, I take two steps backwards.

“When I clap three times you turn around!” he says.

I spin around, laughing with joy. This causes my wife to walk in and look at me with judgment and concern, which she often does when I’m laughing for no good reason. “What. Are. You. Doing?”

“I’m watching the news!” I shout. “I’m keeping informed.” I look at my stockinged feet (who wears shoes these days?). “I’m just doing what Bryan Dobson tells me.”

Yes, I know that in one of the most iconic scenes in literature, Adrian Mole realises his father is troubled when he arrives home to find him watching Playschool and pretending to be an acorn growing into an oak … but this is not the same. I’m perfectly fine.

We’re all under a lot of pressure now and RTÉ’s Home School Hub (weekdays at 11am, RTÉ2) features funny, warm and expressive teachers in bright, colourful classrooms explaining things such as internet safety and maths problems kindly and carefully and slowly. Múinteoir Ray even uses puppets to get his point across (a giraffe and a sort of superhero, representing, I believe, Dev and Michael Collins). Who among us does not want things explained to them like this?

I suspect that if there are any really serious developments to be communicated to the people of Ireland it will happen on Home School Hub first, albeit in a coded format

Wouldn’t it be so much better if chief medical officer Tony Holohan and Leo Varadkar delivered the latest Covid-19 statistics in this manner, possibly with the help of hand puppets (a cuddly coronavirus molecule, perhaps, or a blue medical glove named “Squeaky”)? And in the absence of such news programming, is it really so wrong or, to use my wife’s word, “creepy”, for a middle-aged man with no children to watch a children’s educational show to relearn long division or discover what giraffes eat or to be reminded not to talk to strangers on the internet?

In fact, I suspect that if there are any really serious developments to be communicated to the people of Ireland it will happen on Home School Hub first, albeit in a coded format. I’m pretty sure the last time I Facetimed my nephews they knew something the adults did not, as though Múinteoir Ray had broadcast evacuation co-ordinates or the exact time to put on their gas masks.

Even on the couple of episodes I’ve seen, there is evidence already of a changing world. On Monday when Múinteoir Ray ran through a list of professions as Gaeilge, an dochtúir, an garda, an siopadóir agus an feirmeoir were all accounted for, but I didn’t learn the Irish names for professions such as “hedge fund manager” or “spin doctor” or “social media influencer”. The RTÉ Stickies are more intent than ever on pushing their socialistic public service agenda, says you.

There are some suggestions that the lesson plan might eventually pivot from subjects from the old world such as maths and Irish to something more end-times appropriate. In Múinteoir Ray’s excellently John Cage-esque class on music and “listening” on Tuesday, one of the sounds he dwells on is that of an ambulance siren. On Monday’s episode an excellent animated section about giraffes spends a considerable amount of time on the avoidance of predators. On Wednesday’s episode, Múinteoir Clíona demonstrates how to make a stovepipe hat with rabbit ears that seems like the perfect animal-themed costume for a tribal chieftain or local strongman or Wicker Man worshipper. Before the month’s out, no doubt, the kids will have learned how to forage for food, disarm raiders and chant incantations to ward off evil. All lessons will be delivered with the same uplifting charm.

It all somewhat resembles the bit at the end of Threads in which feral, barely verbal children are taught language skills from old recordings of Playschool

But I’m getting ahead of myself. For now, múinteoirí Ray, Clíona and John and all the animators, scriptwriters and puppeteers of Home School Hub are doing a great job. They’re a soothing, calming and upbeat presence in a world gone mad. They are perfect for educating both the nation’s children and some of the nation’s children’s weird uncle for a post Covid-19 future and, if necessary, a new world. And if it all somewhat resembles the bit at the end of 1980s post-apocalyptic docudrama Threads in which feral, barely verbal children are taught language skills from old recordings of Playschool, then this is no less than any of us who grew up in the 1980s expected. Some of the children I am acquainted with are feral and barely verbal at the best of times (they know who they are).

Elsewhere this week I got a history lesson in olden-days murder from Miss Scarlet and the Duke (Tuesday, Alibi). This is basically a Victorian reformulation of Scarecrow and Mrs King in which a hard-drinking policeman, The Duke, is spurred on to greater and better adventures by Miss Scarlet, a plucky female detective hustling for crimes to solve in the wake of her father’s death. She should really be the singular eponymous character, but I guess they were trying to evoke the sexism of the age and needed to get a man involved somehow.

It also features “Dublin”, an actor you’ll know from Fair City and The Commitments, starring as the streets of Victorian London

If I was a person in this show, at this point I would say something like, “A lady detective! Why, it isn’t proper! What do you even call that? A policemanette? A detectress? It’s ‘Punch and John’, Miss Scarlet, not ‘Punch and Judy’!” Much of the programme features our charming heroine (Kate Phillips) being underestimated due to her womany-ness before pluckily solving the week’s mystery. This is very satisfying to watch. The Duke’s job in all this is to be dismissive and then, later, impressed. At the rate she’s changing hearts and minds she’ll have achieved female suffrage by the end of the series somewhere in the 1890s (I wouldn’t put it past them – this week’s episode featured a public execution decades after the last public execution in Britain).

Nonetheless, it’s zippily plotted, wittily acted and very entertaining and it’s also produced by the Irish production company Shinawil, so there are patriotic reasons to root for it. It features the excellent Irish actor Cathy Belton as the housekeeper, an Alfred to Miss Scarlet’s Batman. It also features “Dublin”, an actor you’ll know from Fair City and The Commitments, starring as the streets of Victorian London. Stuck in one 2km square corner of Dublin, it’s nice to see other bits of it.

‘Do I really care?’ Woody Allen comes out fighting
2

The strain is starting to tell on Brendan O’Connor
3

‘There’s no justice in this’: Inside the new Netflix series on Jeffrey Epstein
8