When Maser wrote his graffiti love letter to everybody

October 11th, 2008: Ireland’s street artists come out from the underground 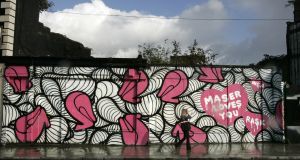 Throughout lockdown, large format artwork in the public realm has brightened up people’s days, from Emma Blake’s brilliant poppy work under her moniker ESTR, to Maser releasing a special edition Homebird print to raise money for the Mater Foundation. It’s interesting to see Maser’s work evolve in the pages of the newspaper also.

On October 11th, 2008, Davin O’Dwyer wrote a piece about Irish street artists, with Maser illustrating the cover of the newspaper’s Saturday magazine. At the time, Maser was best known for his “Maser loves you” slogan that was almost ubiquitous around Dublin.

“Graffiti is abstract typography,” Maser said in the accompanying interview. “You’re building your letters all the time, establishing a typographic identity. Street artists have a different objective, more about transmitting a message, but the two have come side by side, they’re beginning to merge now.

“I’m doing street art with my posters and stickers, but I’m still doing my letters. I have catered more to the general public through the use of simpler typefaces and the use of a slogan, Maser Loves You, rather than just the tag, but I studied fine art as well, so I have that interest in more than just lettering.”

That summer, Maser’s graffiti at the Oxegen festival in Punchestown, Co Kildare was included in The Irish Times as a highlight of the massive music event, alongside Patsy Murphy’s legendary review of Oxegen 40 years after she “borrowed” her mother’s car, and then abandoned it in tailbacks, en route to Woodstock.

“Once you were there, man, you were there. There was no way out... The only way to meet up with my friends – no mobile phones, you see – was, well, to pick them out in a crowd that was, literally, half-a-million strong. In the dark. Or find the noticeboard. But, hey, did we see Creedence Clearwater Revival? Sly and the Family Stone? The Who? Jefferson Airplane? Janis Joplin? Yes we did. From way, way, way back. Did we get stoned? Yes we did. Did we have a love-in at the be-in? Take another little piece of my heart now, baby.”

Today, Maser occupies Atelier Maser in Dublin 2, where he recently decorated the glass front of the street-level studio with the slogan “I hear Hope calling”. Nearby, two of his pieces have once again struck a chord with the public, even though they’ve been in place for some time. There’s “U are alive” off Camden Street, and words inspired by Seamus Heaney’s ones, stretching the gable-length of a building: “Don’t be afraid”.