From the Archive: A 1979 Christmas party for Vietnamese refugees saw coconut cake and Molly Malone 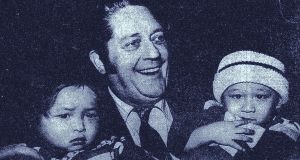 Forty years ago today, on Christmas Eve 1979, the front page of The Irish Times carried an unusually cheery photograph of then minister for foreign affairs Brian Lenihan. The minister was grinning from ear to ear, holding two small children in each arm, An Ngoc Dung (2) and Van Quoc Thanh (3). All were attending a Christmas party for Vietnamese refugees at Blanchardstown hospital in Dublin, organised by the Blanchardstown and Castleknock Residents’ Association.

The reporter in attendance was Caroline Walsh, who died just before Christmas in 2011. “Christmas may not be the biggest event in the Vietnamese calendar,” Walsh began, “but the refugees at Blanchardstown, Co Dublin, had no trouble entering into the spirit of it yesterday when the minister for foreign affairs, Mr Lenihan, paid them a visit. Though he came by shiny State car, not by sleigh, he might as well have been Santa Claus as far as the refugees were concerned, carrying as he did a galaxy of good messages, including the pledge that, given time, the government was willing to welcome more of their countrymen to Ireland. ”

Walsh wrote about Vietnamese refugees grasping Lenihan’s hands, and proffering their babies to be hugged, before singing Molly Malone. The TD Liam Lawlor also got into the spirit, singing The Boys from the County Armagh. The refugees presented Lenihan with a poem about Ireland, titled Land Beyond the Peach-Blossom Stream, “which described this country in the most glowing terms imaginable, from beautiful to paradise on Earth, and proclaimed their gratitude at being here”.

At that time, there were 212 Vietnamese refugees in Ireland, housed at the hospital in Blanchardstown and at a Christian Brothers building in Swords, Co Dublin. The previous week, a new baby was born: Van Tien Nguyen. “Welcoming them to Ireland, the minister told the refugees their problems were now our problems, ours theirs,” Walsh wrote.

The spokesman for the refugees was Danh Quang Tran, a 42-year-old businessman and father of three from Saigon, who was working as a part-time teacher and liaison officer with the department of education, as well as giving English classes to elderly refugees in the group. More than 12 of the refugees were working in the clothing, weaving, building and jewellery trades in Ireland.

“It was stressed yesterday that new offers of employment for other refugees would be welcome,” Walsh reported.

Speaking to reporters, Lenihan said the government was willing to take in more Vietnamese refugees. Meanwhile, the then archbishop of Dublin, Dermot Ryan, gave a check for £10,000 to the Red Cross “to help their work in this area”. Jim Kennedy of the Red Cross said the group of refugees would be having a Christmas dinner the following day, and that each child would be given a present.

“The party began to tackle a massive blue coconut cake,” Walsh wrote, “made especially for the occasion and iced with a bright green map of Ireland.” Walsh noted that on the same day, 25 Vietnamese children also attended the annual Christmas party of the De La Salle Rugby Club in Carrickmines, Co Dublin.

Throughout 1979, the letters pages of The Irish Times included correspondence from readers urging the Irish government to take in more Vietnamese refugees. A few months prior to the Christmas party, on Friday, August 10th, photographs by Eddie Kelly of refugees arriving in Dublin Airport from Frankfurt, many of them children, filled half a page of The Irish Times, with the headline: “A new country, a new life.”

“Hopefully we Irish people will find the heart to show hospitality to far more than the 200 intended by our government,” a reader named Rufus Halley wrote in the letters pages of the newspaper the following Monday, “It would certainly be difficult to open our doors to a thousand refugees, but I think we’re up to the challenge.”

Before their arrival, a committee representing government departments and State bodies was set up to deal with the rehabilitation, training, employment, health and social welfare of refugees as they prepared to come to Ireland on an Aer Lingus flight.

“A number of local communities have already offered accommodation to some of the refugees, including the Co Donegal village of Gartan,” a report in the newspaper on August 6th read. Suggested employment opportunities in the village included turf-cutting. The people of Arranmore Island off Donegal also offered to accommodate refugees.

As Irish people welcomed the refugees, one particular story of efforts to help them stands out. Firms in Galway, Clare and Limerick sponsored the cost of cutting 50 tonnes of turf in Connemara, which was then loaded on to four Galway hookers and auctioned in Kinvara. The proceeds of the auction were donated to Unicef and Concern, with other fundraising events also planned in Kinvara at the time.

This Christmas in Ireland, about 6,000 asylum seekers are living in direct provision centres around the country.

Click here to view the front page of The Irish Times of December 24th, 1979