At the epicentre of the recent protests over the union flag, a Protestant Irish-language revival is taking place 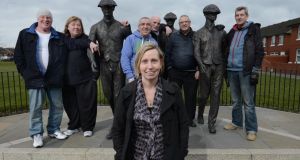 Linda Ervine and the rest of the Irish-language class pictured in east Belfast. Photograph: Charles McQuillan/Pacemaker

Northern Ireland has always been more complex and contradictory than the stark news footage of burning cars, painted kerb-stones and rampaging youths would seem to suggest. But even the most seasoned observers might be surprised to learn that, right at the epicentre of the recent protests and riots over the union flag, a Protestant Irish-language revival has been taking place in East Belfast.

Linda Ervine, a sister-in-law of the late loyalist leader David Ervine, and the first Irish-language development officer in the east of the city, says that one night it was touch and go whether they could proceed with an event.

“We had a speaker over from West Belfast at the height of the trouble, and we thought no one would turn up to hear him. But we actually ran out of chairs in the end. One man said that he couldn’t believe that in the middle of all the flags and police Land Rovers there was a talk about Irish placenames going on”.

Ervine, who is based at the East Belfast Mission on the Newtownards Road, started learning Irish two years ago as part of a cross-community project with women from the nearby nationalist Short Strand. Now she's running five classes a week, delivered by three specialist teachers. It is supported by Foras na Gaeilge, and there is a growing demand for more. Last month Ervine hosted an Irish-language festival as part of the island-wide Seachtain na Gaeilge; the celebrations included East Belfast’s first Irish-language Dianchúrsa, and a bilingual play about Robert Shipboy McAdam, the 19th-century Presbyterian industrialist and Irish-language exponent, famous for welcoming Queen Victoria with a heartfelt “Éirinn go Brách”.

“What I’m trying to do is to give people in my own community the opportunity to engage with the lost part of their heritage,” says Ervine. “I want to return that to them. It almost feels like we’re giving them permission, perhaps because there’s a lingering sense that it's something disloyal. But now the time is right to reconnect with the language, there’s nothing to be ashamed of. And there have always been plenty of Protestants learning Irish quietly. We’re just making it visible.”

“Oh, she has a passion for the language all right,” laughs Ervine’s husband Brian. “To her, it’s something beautiful, it’s the healing tongue, and it’s being used here to heal divisions in our society. We have a situation of sectarian apartheid in Northern Ireland, a forced, contrived marriage at the political level, but not enough happening at the lower levels.” He adds that “unionists didn’t have a problem identifying with Irish until it was hijacked by violent nationalism. Depoliticised language is the basis for ordinary people to get together.”

Brian Ervine says his brother David learned some Irish, alongside other well-known loyalist figures such as Gusty Spence and Billy Hutchinson, when he was in jail. But recently, he discovered that there was already an Ervine family tradition of speaking Irish. “I went into the 1911 census, and I found my grandfather and his two brothers. They lived on Frome Street, a very tight unionist area, right in the shadow of the shipyard. These men built Titanic , they went to the Somme. But the census also told me that the whole family were Irish speakers. In fact, of the 70 families on Frome Street, 14 spoke Irish. It was a revelation to me. There were even more on the Shankill; as many as, if not more than, on the Falls.”


‘Great support’
Linda Ervine is keen to emphasise that she doesn’t want to create what she calls a “Protestant Irish -language utopia” in East Belfast. “We encourage our students to go up to Cultúrlann on the Falls Road, and we've had great support from within the Irish language movement. They have bent over backwards for us, and we have made some real friends there.”

Michelle Porter, who has been learning Irish in East Belfast since last September, recently travelled to the Donegal Gaeltacht with her father, to develop their conversational skills. “Being from Ireland, I’d like to be able to speak the language.”

Ervine herself participates in as many classes as she can, in all parts of the city, and is a regular attendee at the Irish-language church services at St George’s Church of Ireland and Fitzroy Presbyterian church. But she is also interested in the hidden history of Protestants and the Irish language, the surprising ways in which Gaeilge is woven throughout the culture, from school crests to the motto and the insignia of the Royal Irish Regiment. Ervine also points out that the motto of a loyalist paramilitary grouping, the Red Hand Commando, is in Irish: Lámh Dearg Abú, or Victory to the Red Hand.

Ervine says that Protestant people who have spent some time away from Northern Ireland often return “less frightened by the idea of Irishness”. She says, “It can even become something they hanker after. No matter how Orange you are when you’re here, you’re Green when you’re away.”

This was the experience of one of her students, Robin Stewart. “It’s a voyage of discovery of who I am,” he says. “We say we’re British, but we’re always more than British. A lot of us are descended from Gaelic people; we have as much connection with this place as the people who tell us we’re just Brits. For me, going for Gaelic is a natural thing. And I like to wind people up, to challenge their assumptions.”

Stewart grins mischievously, before saying: “The English imposed their language on me, and on all of us. In learning Irish, I’m getting up off my knees.”