The pioneering days of women’s rugby

An Irishwoman’s Diary on ancient inspiration for a modern game 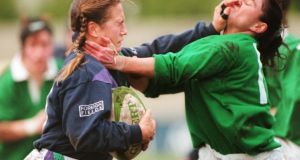 I played in what was, to my knowledge, the first all-women’s rugby match to be held in Trinity College Dublin – and possibly the first such match in Ireland. The year was 1980 and the match took place not long after a group of sportswomen in the college had come together to set up the Heraeans Society.

This was to be an organisation that would honour women in their sporting achievements, or as we saw it, act as an important counterpoint to the Knights of the Campanile, which was then an exclusively male club (“a fraternal sporting organisation with a membership of over 700 from all over the world”. A fraternity, if you will.

I don’t recall any vote about us playing a rugby match at the first meeting of the women’s group, which still didn’t have its official name yet, but more of that later.

Enthusiasm swept us along and we were pretty much punching the air shouting “yes” once the idea of the match was touted; it all seemed like a great wheeze, and there I was committing to playing in a rugby match that would take place a few weeks later. “I don’t want to get hurt” was a thought that simply could not be expressed (whether you’d thought it or not). We were strong sportswomen and none of us would dare to suggest we couldn’t or wouldn’t play rugby out of fear. We had to show the men that we meant business. UCD were to be invited to compete, and that was that.

A couple of training sessions with Donal Spring were arranged.

The only coaching instruction that made any sense to me (and the single thought I focused on in the heat of the match) was that if you got the ball you were to secure it under your arm, run like hell to get away from the pack, and head for the try-line. And this is exactly what happened.

Brilliant as the feeling of scoring a try was, this was to be my first and last rugby match. Uninjured and with a try under my belt, I reckoned I had got away lightly.

My memory of exactly how the Heraeans were named by the group of founding members is hazy.

We were searching for a name and someone decided to look at the women of the classical world for inspiration. Real library research must have happened back then, perhaps by a classics scholar, whereas today Prof Wikipedia is my assistant. And so I can, with reasonable confidence, say that the ancient Heraean Games, dedicated to the goddess Hera, were the first sanctioned (and recorded) women’s athletic competition to be held in the stadium at Olympia. Like the men’s competition, Heraea originally consisted of foot races only.

The Heraean champions won olive crowns, and cow or ox meat from the animal sacrificed to Hera; and the right to dedicate statues inscribed with their names or painted portraits of themselves on the columns of Hera’s temple. So that must have been a no-brainer – we would be called the Heraeans after goddess Hera.

At the time, my sport of choice, and the reason I was involved, was sailing. The men’s sailing teams from all the colleges in Dublin were intrigued with these developments. A women’s rugby match? Goddess Hera? Who?

But since this was the 1980s and toga parties were popular (don’t ask) they had no problem with the idea of us Heraeans prancing about in togas. I almost can’t bear to add the next bit, but, somehow, we let slip the information that Pausanias (Spartan general of the fifth century BC) had described Heraeans at the games as being dressed in togas which bared the right shoulder as far as the breast. It didn’t take long for the men to put it about that all Heraeans had to wear togas with their right breast bared.

Yes, we had scored a rather spectacular own goal.

To work on TV, Normal People had to differ from the book
7