The long history of linen-making in Ireland

From the archive: In 1917, The Irish Times printed an article about ‘our debt to William III’ for his contribution to the Irish textile industry 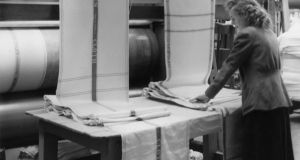 On Saturday July 14th, 1917, The Irish Times printed a rather brave article about “our debt to William III”. Lauding the legacy of William of Orange is generally not the most popular thing to do in the 26 counties. As recently as 2018, the bar and restaurant group Press Up Entertainment had to change the name of a then soon-to-be-opened pub from Dutch Billy to the Lucky Duck, lest someone make the association. That Press Up was actually referring to the type of gable-fronted houses reminiscent of Amsterdam that existed in Dublin and not the man himself was a moot point.

The writer of the article, Alfred S Moore, had a point to make. “Though we in Ireland generally associate the Twelfth of July celebration with the defeat of James II by the forces of William Prince of Orange, at the Battle of the Boyne, there is one important aspect overlooked in the fact that, from an industrial and economic point of view, the celebration has a very much wider interest to Ireland in general. At any rate, it is to William III and his Linen Controller of those days, Louis Crommelin, that the Emerald Isle really owes the prosperity of what may well be described as her chief industry today – the linen manufacture.”

Moore was writing this piece in the middle of the first World War, during which Irish linen was in high demand in the manufacture of warplanes. “It may not be known that linen of the very best quality, and of such a description, strength, and air-resisting quality as can only be supplied by the Emerald Isle, is essential for the manufacture of the planes of the flying machines,” Moore wrote.

He added: “Moreover, when it is estimated that two webs of this minutely tested linen of the most perfect weaving – ie 180 yards in all – are required to clothe one single aeroplane, and that such material must be replaced after every dozen or so runs, it may be calculated how potent this special and new development is in its immense possibilities for Irish factories.” Such use of Irish linen would “surely” be a “patriotic boost to Irish people and Irish industries if glorious victory is accomplished by aeroplanes manned by Irish airmen and equipped with Irish linen.”

Billy’s linen controller, Louis Crommelin, was born in Picardy but fled to Holland with many other Huguenots and, at the invitation of the Prince of Orange, moved to Lisburn. The Huguenots introduced improved looms and spinning wheels to Ireland, and Crommelin imported 1,000 looms and wheels to supercharge the industry.

Early on, Crommelin made a distinction between the different types and cycles of linen and textile manufacturing in Ireland. “There is a vast difference,” he wrote in his 1705 book An Essay towards Improving the Hempen and Flaxen Manufacture, “between a trade that is cultivated by a few, whose produce is hardly known in foreign markets, whereby to acquire reputation and esteem, and a trade that is general and in some sense national, and that is under due and proper regulations whose goods beget an esteem and value in proportion to their deserts”.

There is a sense here that, 315 years ago, Crommelin was identifying the tensions and realities that distinguish artisan or small batch textile production and a much larger commercial industry. While Crommelin can be viewed as the founder of the commercial linen industry in Ireland, textile manufacturing existed here for hundreds of years previous to that.

At a recent Nollaig na mBan gathering at the Circular pub on the South Circular Road in Rialto in Dublin 8, Marja Almqvist, a local textile artist, maker, community development worker and founder of the Yarn School, detailed her Weaving in the Liberties project, which recently ran a 10-week course concluding before Christmas. Almqvist’s knowledge about linen stretches far back before Crommelin and his associates, and she makes the point that while the contemporary commercial gentrification of the Liberties is very much focused on alcohol-based attractions for tourists with new distilleries and so on, it’s textile making in Dublin 8 that is perhaps more embedded in the area, existing for a thousand years.

Almqvist’s multiple textile projects include a quilt made to honour the 77 women arrested in the aftermath of the 1916 Rising, and the Suffragette Hat Project, where 100 women gathered at Richmond Barracks in Dublin 8 in 2018 to create Suffragette-style hats.

Crommelin-influenced or not, weaving and textile design and making is not a historical pursuit. In Rialto, Almqvist reminded the other women in attendance that every time they sit on the Luas, they’re sitting on a piece of Dublin 8 material, woven in the Liberties, at Botany Weaving, founded in 1934, and still very much weaving away.