‘The Hist’: 250 years of self-indulgent theatrics and transformative debate 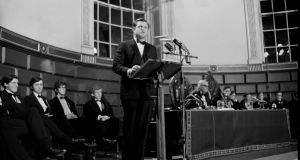 During a meeting of Trinity’s College Historical Society on Wednesday March 1st, 1961, the British peer, Lord Windlesham, admitted that apartheid was “immoral and wrong” but suggested that it would take time to remove it because of “the tremendous task in educating the African masses”.

This view was immediately challenged by Oladele Olusiji Kale, a young Nigerian student studying medicine in Trinity, who argued that “this evil called apartheid is the greatest evil since Nazism”. Kale would go on to become professor of preventative and social medicine at the University of Ibadan and a leading public health expert.

When the motion was put to a vote, the system of apartheid was rejected by 35 votes to eight and the result was widely reported. “Apartheid condemned in TCD debate” was the headline on page 3 of The Irish Times the next day.

Two years later, Nelson Mandela and other leaders of the ANC were put on trial for sabotage and other crimes, in what became known as the Rivonia Trial, and the South African government pressed for the death sentence. Behind the scenes, another former Trinity debater, the Nigerian foreign minister, Jaja Wachuku, persuaded the British and US governments to intervene.

Wachuku, who wore his Trinity College tie at cabinet meetings, had been a leading member of the College Historical Society in the 1940s, where he won a medal for oratory.

In this instance, he used his powers of persuasion to convince the British and Americans that the execution of the leaders, and Mandela especially, would destabilise African politics. The intervention proved decisive and when Mandela was convicted in 1964 he was sentenced to life imprisonment.

Wachuku was honoured posthumously as a “hero of the struggle for Nigeria’s independence” who helped persuade competing factions to press for independence in 1957. The Times of London noted that “it was Mr Wachuku’s oratory which brought a compromise”.

This year the College Historical Society celebrates the 250th anniversary of its founding. It is the oldest student debating society on these islands and perhaps the oldest student society in the world. The rival University Philosophical Society in Trinity claims an older lineage, going back to 1683, but it was actually created in 1853 as is well documented in the college records.

Throughout its existence, the College Historical Society has been place where different generations of Trinity students have seen the democratic ideal in action, the belief that ideas should be contested in a public sphere, debated by speakers on different sides, and then put to a public vote.

It has provided a forum for members from different backgrounds and beliefs to come together, test their ideas and develop their oratorical styles. Many of its members have gone on to significant careers in Ireland and around the world, including in politics, literature, law, science, business and intellectual life.

They include: Theobald Wolfe Tone and Robert Emmet in the 18th century; Thomas Davis, Isaac Butt and Edward Carson in the 19th; Jaja Wachuku, Mary Harney and Leo Varadkar in the 20th; and Sally Rooney in the 21st.

Called the Historical Society from 1770 to 1815, it dissolved itself rather than submit to restrictions imposed by the college authorities over what it could and could not discuss. Reforming outside the walls, it continued to provide a forum for new ideas to be presented and challenged, before returning Trinity as the College Historical Society in 1843.

Known popularly as “The Hist” since the 1920s, it continues to meet on Wednesday nights during term time. Today, its meetings are live streamed online.

Ireland changed significantly over the course of this period, from being a subordinate part of the British empire, to an independent state, self-confident about taking its place among the nations of the Earth.

Trinity also changed significantly in this period, admitting Catholics in 1793, women in 1904 and transforming itself into a national institution with an international reputation.

Despite the many changes throughout this period there has been a remarkable continuity in the story of the society. It has consistently been a sphere of ideas, championing free debate and democratic principles, sometimes attracting controversy.

It has also been an arena of ambition where members have tested themselves against their contemporaries and honed the skills that would serve them later in life, a place where great ideas were contested and opposing viewpoints (for the most part) treated with respect.

Over the 250 years oratorical styles have gone through many fashions, motions for debate have changed considerably and even the format of meetings and events has evolved significantly.

Nonetheless, there is a remarkable continuity. For example, every generation suspects that its successors are not as serious, not as impressive, not as good. This attitude was there from the beginning. At the start of the sixth session, in 1775, the chair criticised the society for already being in decline and regretted that it was no longer producing “wits and poets and orators”. Similar criticisms have been made in later generations and yet wits, and poets and orators, and more besides, continue to come through its ranks.

Some criticisms are more justified. For far too long, the biggest weakness undermining the society was its exclusion of women. It will surprise many people to learn that women sometimes attended meetings of the society in its early years, although this was a controversial issue.

In 1931 the society voted to admit women but unfortunately the change was never implemented. Every year the issue was debated and The Irish Times in 1964 condemned the refusal to change calling it, “this traditionally ‘misogynist’ society”.

The exclusion eventually became untenable and was dropped in 1968. Women played a decisive role in bringing about this change and the controversy stands in contrast to the society’s role as a driver for change in so many other areas.

For many, the image of debating societies in general, and perhaps The Hist in particular, is one of elitism and exclusivity. By the nature of their activities they attract only a subset of the wider college community, but it is a self-selecting group who get involved and there are no barriers to who can join.

However it is not easy to stand up to speak in the chamber in the Graduates Memorial Building, especially if one is aware of its history. Many find the prospect intimidating or off-putting, or are just not interested.

The talented novelist Sally Rooney came to prominence with an article she wrote about her competitive debating career. She remarked: “College debaters are just students wearing ill-fitting formal clothes, and most of them aren’t even very good. But, crucially, some of them kind of are.”

Rooney herself was one of those debaters who excelled in the society, described as “eerily clever and stunningly eloquent in equal measure” by one of her debating partners. Her subsequent success as a novelist continued a literary tradition in the society, which included Sheridan le Fanu, Bram Stoker, Oscar Wilde and Oliver St John Gogarty.

There are other literary connections. James Joyce, himself a brilliant student debater in UCD’s Literary and Historical Society (or “L&H”), has a passage in Ulysses where one character discusses “the finest display of oratory I ever heard” and attributes it to “a speech made by John F Taylor at the college historical society”.

This bestowed a kind of literary immortality on the society, bringing it to the attention of scholars around the world although, as it turns out, the speech it is based on actually took place somewhere else. WB Yeats often spoke and chaired meetings of the society and his son, Michael, was later was elected auditor, the title given to the society’s head. It was The Hist that chose this unusual designation in the 18th century and it would bequeath it to other student societies on the island.

Attracting high-profile guest speakers is a long tradition of the society, which in the past has welcomed figures as diverse as Winston Churchill and Micheál Martin, John Hume and Mary McAleese (when president of Ireland), Colin Parry (whose son, Tim, was killed in an IRA bombing in Warrington and who delivered many moving appeals for peace in the 1990s) and Hilary Mantel.

Sometimes the focus is on celebrities and this goes back to the origins of the society, when there was some tension after some members proposed presenting a medal to Sarah Siddons, the most famous tragic actress of the 18th century, who was visiting from London.

Ten years ago I was approached by the society to write an official history for its 250th anniversary. Having never been a student in the university, – though I occasionally attended debates with the L&H in UCD and then later as a member of staff in Trinity – I approached the records with a critical eye.

Not all meetings were historic, not all speeches were profound and the society had its share of self-indulgent theatrics and tedium. It has also been transformative. By providing a peaceful forum to speakers representing every shade of opinion, it has been a place where great ideas have been contested and where national and international figures have been shaped.

Today, in the 21st century, it still serves the same vital function.