Remains in River Valley Park in Swords removed for analysis 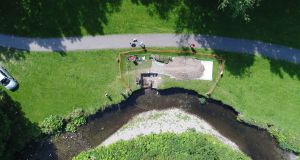 Skeletal remains of a 12 year old found in a north Dublin park earlier this year in a medieval “plague” burial ground have been removed for analysis following the easing of coronavirus restrictions.

In April, locals out walking in River Valley Park Swords spotted exposed human skeletal remains on the southern bank of the Ward river, and reported the find to gardaí.

The National Museum of Ireland quickly confirmed that the remains in a burial ground dated back to the 15th century, and had been exposed by March and April’s unseasonably dry weather .

Due to Covid-19 regulations, the site could not be excavated at the time but work began following the easing restrictions, Fingal County Council told The Irish Times.

The site has an archaeological monument since 1999 when National Monuments Service archaeologists excavated six skeletons after a skull was seen protruding from the soil.

“These were medieval in date and as the burials were deposited in an irregular fashion within a flood plain it was thought they may reflect some form of communal hasty burial of victims of plague or other trauma,” the council said.

A geophysical survey was carried out recently to identify the size of the burial ground. An excavation to retrieve the most recently discovered exposed skeletal remains subsequently began .

Excavation was undertaken by Maeve McCormick of Archer Heritage Planning Ltd under licence from the Department of Culture, Heritage and the Gaeltacht in consultation with the National Museum.

Ahead of analysis, Ms McCormick, an osteoarchaeologist, indicated the latest skeleton found was a juvenile, probably 10-12 years of age, and part of the same burial site excavated in 1999.

Radiocarbon dating and specialist analysis of the environmental samples and both the animal and human remains at the site is ongoing, said Christine Baker, the council’s heritage officer.

“We are also investigating the most appropriate means to suspend the erosion of the site and will continue to work with the National Monuments Service and the National Museum of Ireland to protect this archaeological monument”.

Mayor of Fingal Green Party councillor David Healy said archaeological finds help to discover “more about the rich heritage that lies all around us”. In 1999 iron nails and an Edward I silver penny from the 1280s were found.