In 1986, U2, Van Morrison and Clannad sang for jobs, but not everyone was in tune with it 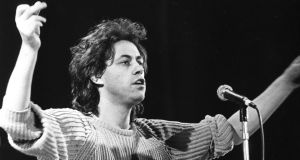 Bob Geldof: When Self Aid took place at the RDS, some 17.3 per cent of the workforce was unemployed. Photograph: Terry Thorp

On May 13th, 1986, The Irish Times printed a preview piece about what was one of the most anticipated musical events of the era, although one that also generated a considerable amount of debate. “Famine in Africa evokes a simple response but unemployment in Ireland is immediately perceived as a more complex subject,” Maev-Ann Wren began, “Or so the organisers of Saturday’s Self Aid concert have been discovering.”

Self Aid was “the brainchild of some of the RTÉ crew who worked on Live Aid,” and also brought together the Irish Congress of Trade Unions, the Federated Union of Employers, the Industrial Development Authority and others. By the time the concert moved from the idea phase to the production phase, ICTU was already annoyed by the name change from “Jobs Aid” to “Self Aid.”

“We would be totally opposed to the ideological connotation that it is up to people to create their own jobs, and that it is not economic and social policies generally that are creating our problems,” ICTU’s economic and social affairs officer, Peter Cassells, said at the time. “The State has failed and failed miserably or we wouldn’t have 250,000 people on the dole,” RTÉ producer Niall Matthews said, “We are not talking about solving the unemployment situation. We are trying to give a platform for a different view of the problem.”

Matthews and a colleague, Tony Boland, spoke to State agencies earlier in 1986 and “from their canvass, a broadly representative monitoring committee developed which has been meeting regularly, assessing projects which may receive funding from Self Aid proceeds, and establishing guidelines on such philosophically tricky questions as ‘what constitutes a viable job?’” The concert was to be broadcast over 14 hours on RTÉ.

The primary object of the exercise is inspirational. Self Aid is a celebration of positive thinking

The Labour Youth movement, journalist Eamonn McCann and musician Paul Cleary “have all adopted positions of active opposition to the concert in protest against the ‘Self Aid’ philosophy”. The Irish government offered to contribute to the Self Aid fund, but that offer was refused.

Some 17.3 per cent of the workforce was unemployed at the time. “As the limitations of the concrete side of Self Aid – the fund and the job pledges – has come under public scrutiny over the last few weeks, the organisers are at pains to point out that the primary object of the exercise is inspirational. Self Aid, they say, is a celebration of positive thinking.”

The concert went ahead as planned with a blockbuster Irish lineup including U2, Van Morrison, Clannad and Rory Gallagher, raising money from ticket sales along with around £500,000 donated by the Irish public over the phone throughout the broadcast.