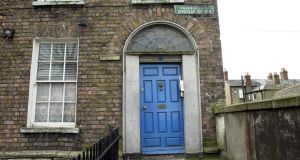 The house had gone on the market in 2018 for €450,000 but was recently offered for sale for €625,000 despite its condition having deteriorated in the intervening years. Photograph: Matt Kavanagh

In March of last year the council said it was buying 422 North Circular Road, O’Casey’s last Dublin home, for use as homeless accommodation.

However, the purchase did not go ahead, and the council last month said it was unlikely to proceed due to coronavirus funding constraints, and a reduction in need for homeless accommodation.

The council’s head of housing, Brendan Kenny, said funding had now been secured, and the council would buy the building.

“We have a good indication that the funding is there so we are going ahead with buying the house for emergency accommodation.”

The house had gone on the market in 2018 for €450,000 but was recently offered for sale for €625,000 despite its condition having deteriorated in the intervening years. The house was also broken into last year and its basement level is now boarded up.

Mr Kenny said the council would be paying a sum in the region of the new asking price, adding that he expected a cost of “€1 million or more” in refurbishment work.

Independent councillor Mannix Flynn said while he welcomed the purchase of the house, it would be more suitable as a “cultural hub” dedicated to O’Casey, than as homeless accommodation.

“I think it is fantastic that the council is buying this building which is now badly in need of protection, but I think it should be used as a cultural hub, a cultural destination in the north inner city that would honour O’Casey in the same way James Joyce is honoured on North Great George’s Street,” he said.

The Dublin City Council Cultural Company had properties in its ownership which would be more suited to homeless accommodation, Mr Flynn said, and he suggested a “swap” arrangement might be possible.

“I am not saying there would be anything untoward about using the building for homeless accommodation, but the cultural company has several modern apartments in its ownership that would be more suitable and I think we should look at a potential swap.”

Labour councillor Joe Costello said he would also like to see an endeavour similar to the James Joyce centre in the house, or for it to be used for accommodation for young writers.

“Young writers cannot afford to live in Dublin city. O’Casey came from poverty and something that would reflect his background, and provide accommodation and research resources for young writers would be a good use.”

Mr Kenny said the house would not be used as a cultural centre. “It will not be a museum. It is being bought for homeless accommodation. But I would have no difficulty with it being called Seán O’Casey House.”

O’Casey’s fellow tenants in the house, where he lived through much of the 1920s, provided inspiration for several of his characters, including Mollser Gogan and Captain and Juno Boyle.

The four-storey house was built as a family home in 1810, but was divided into tenement flats more than a century ago and, until recently, was in use as bedsit accommodation.

The house has retained some of its Georgian features including an ornate fanlight and cast-iron griffin boot-scrapers and is on the Record of Protected Structures.