Sale of Garech Browne's Luggala contents raises over €500,000 at auction 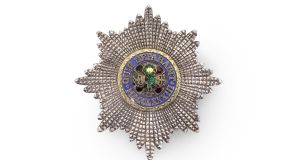 More than half a million euro was raised at an auction of contents from Luggala, Co Wicklow, one of Ireland’s most celebrated country estates.

Just over 60 lots from the famed home of the late Guinness heir Garech Browne went under the hammer during an hours-long sale at Sotheby’s in London on Tuesday evening.

Two watches, both of which reached the highest prices from the collection, sold for €66,156 each. One of them, a mid-17th century enamel timepiece made in Paris, was described as having a gilt centre with enamel daisies, engraved edges under a case depicting Flora, the goddess of flowers. Around the edge it was decorated with painted flora as well as bow and arrows ( symbols of love and fertility) while bouquets of flowers adorned the inside of the case.

The other watch was described as being gold and enamel and was made in about 1820 for the Chinese market with Roman numerals and subsidiary seconds. On the back was an enamel scene depicting a lady and a gentleman in classical dress against a landscape.

Also attracting bids during the sale was a jewelled breast star representing the Most Illustrious Order of St Patrick. The hammer came down on the unusual lot at €32,343 – more than three times its estimated price.

The award, created by King George III in 1783 during the American war of independence to honour the loyalty of Irish peers, was given to Browne’s father, the 3rd Baron Oranmore and Browne, Geoffrey Henry Browne, in June 1918.

Only 145 Knights of St Patrick were ever appointed, with the last in 1936.

The total price for all the lots from the Luggala collection was €525,354.

A well-known art collector, Browne died in London in March 2018 at the age of 78 at a time when his 2,000 hectare Luggala estate, in the heart of the Wicklow mountains, was on the market.

A reclusive Italian count is believed to have bought the house, which has been a retreat for musicians and artists including U2, Mick Jagger, Sinead O’Connor, Edna O’Brien, Michael Jackson and Ariana Grande down through the years.

It is thought to have sold for more than €20 million but significantly less than its original asking price of €28 million.

Items from Killadoon House, the home of the Earls of Leitrim, near Celbridge, Co Kildare were also auctioned off at the same Sotheby’s royal and noble sale.

The most valuable item was an early 17th-century Italian table top, made of stones pietre teneare and pietra dure. It fetched €117, 270 which is almost twice its guide price.

A caricature oil painting of Thomas Brudenell-Bruce, 1st Earl of Ailesbury, along with the Hon John Ward, Joseph Leeson, later 2nd Earl of Milltown and Joseph Henry of Straffan sold for €102,611. It was believed to have belonged to Joseph Leeson, of Russborough House, Co Wicklow, before being gifted to Elizabeth, Lady Leitrim.

A pair of equestrian battle scenes, carved in wood and dating from 1753, were sold for €80,623. It is believed the Flemish works originally hung in the entrance hall of Lord Leitrim’s house in Sackville Street (now O’Connell Street) in Dublin.

A set of eight Irish George III mahogany hall chairs from the late 18th or early 19th century, once owned by the 1st Earl of Leitrim, sold for €55,703. The entire Killadoon House collection reached €1,109,744.