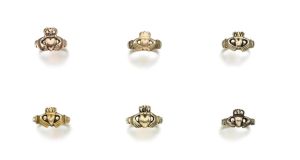 Claddagh rings from Garech Browne’s collection feature in the Sotheby’s Royal and Noble sale on January 21st in London.

Twenty-two Claddagh rings from the collection of patron of the arts, traditional Irish music and poetry enthusiast and all-round bon viveur Garech Browne, who was custodian of the Luggala estate in Wicklow until his death in 2018, feature in the Sotheby’s Royal and Noble sale on January 21st in London.

The Claddagh name, though today known for its Celtic symbolism on love and friendship rings, had a special place in Browne’s heart after the Claddagh district in Galway. He chose the name for the company he established “because it had the symbol and the name, and we are the Brownes of Galway”.

Claddagh Records, located in heart of Temple Bar, was founded in 1959 by Garech and his friend Ivor Browne, the noted psychiatrist, in a bid to record and distribute the music and poetry of traditional Irish performers.

The pair, who were students of Leo Rowsome, one of Ireland’s leading uilleann pipers, were later joined by poet John Montague and genealogist Liam Mac Alasdair to create what was to become a unique reservoir of Irish music and the spoken word.

In 1970, Jane Bolton became personal secretary to Browne and his mother, Oonagh Guinness, Lady Oranmore, at her home in Luggala, in a role that involved running the entire 5,000 acre estate.

In an unusual set-up, the kitchen garden at Luggala was owned by the Guinness family trust, and “I had to account for every head of lettuce, carrot and all the vegetables that came from the garden,” Bolton says.

This required her to buy a newspaper weekly to establish that week’s price for vegetables, and create an invoice so the trust could bill the household for the vegetables eaten at Luggala.

In 1971, Browne moved from Dublin to Luggala, which Bolton describes as “a far less formal affair, where he loved being a patron to artists, musicians and poets”.

But when it came to Claddagh Records, she recalls: “Garech loved to surround himself with musicians and poets, and while he entertained and recorded them, when it came to budgeting he really hadn’t a clue.

“He put so much effort and money into the sleeves of the records – which made us unique as a record label – but the cost of production became enormous.” She cites an album, A Drunk Man Looks at the Thistle, made with the Scottish poet Hugh MacDiarmid, which had a cover designed by artist John Bellany, and which “never made a penny because of its production costs”.

In 1980, Bolton persuaded Browne to allow her help run the record company. “While I knew nothing about music at least I could budget.” Bolton is celebrating her 40th year at Claddagh Records.

The company now owns part of the building it occupies at 2 Cecilia Street (St Cecilia is, coincidentally the patron saint of music), which was purchased in the 1980s at Bolton’s behest. For years the company shared the building with the recording studio STS, where U2 among others recorded.

“When Garech inherited Luggala, nobody asked if he had sufficient funds to run the estate, which he didn’t, so he became non-resident for tax purposes. I had to tear up his cheque book and bank cards, and give him essentially what was pocket money each week,” Bolton says.

While Browne was living abroad, Ivor Browne and Bolton decided to create a compilation of music entitled Claddagh’s Choice “to do something nice for Garech”.

For the record cover, Bolton went to Luggala and borrowed some of Browne’s Claddagh rings – which are those featured in the Sotheby’s sale – and commissioned graphic artist Mick Russell to paint the album cover featuring the rings.

“When we presented Garech with the album, he was furious, saying: ‘This is exactly what Claddagh was founded to prevent – compilations.’ He also did not want to open a record shop, as didn’t think we should be selling other artists’ records, but we knew we had to do that to become commercially viable.”

It wasn’t until the advent of compact discs that the company really started to make money. At once point it had annual turnover in excess of €1 million, but this has dwindled due to streaming sites and the fact that worldwide agents who in the past distributed Claddagh Records albums have since gone out of business.

“At one point we had an income of €25,000 from the week’s sales at the Willie Clancy festival in Clare, but now the festival shop has closed. It is at least a decade since we recorded an album, and people just don’t buy compact discs any more.”

This could result in a terrible loss not just for Claddagh Records but also, as Bolton points out, for Irish music: “A significant number of these albums are not digitised, therefore not available to stream, so this music could be lost forever.”

To counteract this, Bolton and her team are planning international access to all of Claddagh Records’ material, followed by a book on the company’s history and an exhibition later this year.

After 40 years through the trials and tribulations at her post in the record company, Bolton is the epitome of what Claddagh rings once symbolised. They have belonged since Roman times to a group of finger rings called fede, after the term “mani in fede”, which translates as “hands joined in faith and loyalty”.