Thom McGinty was one in a long line of legendary Dublin street characters, like Zozimus and Bang Bang 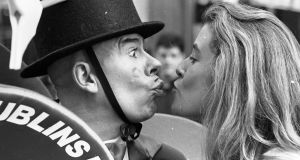 Olwyn Donovan from Drimnagh about to kiss The Diceman (Thom McGinty) during her St Valentine’s Day 1992 attempt to set a world record for the number of kisses in eight hours. Photograph: Frank Miller

Thom McGinty is remembered as a theatrical presence on Grafton Street. As a gay icon. As a national treasure. But for me The Diceman was just an obstacle on the way to work.

In the mid-1980s I spent two summers working as a waiter in the Coffee Inn on South Anne Street. That famously bohemian cafe was owned by my half-uncle Dave Wine, a benign figure who kept nightclub hours. Dave would amble into work around noon, make himself a fry-up, smoke a cigarette, down five cups of coffee and start to play the host, a performance that was itself something of a work of art, complete with wry asides and infinite patience for the buskers who came in hungry and tired with small mountains of coppers. Glen Hansard knows what I’m talking about.

Another Oscar-winner, Lenny Abrahamson, was also among the regulars in the Coffee Inn, along with Mannix Flynn, the Benzini Brothers – younger readers may know them as the Hothouse Flowers – and the late Christopher Daybell, the street poet whose opening line (“Do you read poetry?”) was surely the most genteel sales pitch in Irish history. Each of these men knew Thom McGinty well. I did not.

Being – in Wilde’s formulation – young enough to know everything, I thought of McGinty as that weird Scottish bloke who caused a commotion on Grafton Street by doing nothing in particular for hours on end. I remember being impressed by the audacity of this barely-moving statue. This man who pretended to be a sad clown or Mona McGinty. (“The bare décolletage in winter can be a problem,” he once admitted, “but a polo neck on Mona Lisa just wouldn’t work.”)

Today McGinty is known simply as The Diceman, but I am not sure that the moniker was so firmly established back then. I can see him on Grafton Street, certainly, but my clearest image of him is sitting in a booth in the Coffee Inn, surrounded by friends. I remember catching the difference between his public and private selves: gregarious in the company of intimates, but otherwise polite, even reserved. Not, that is, the exhibitionist he appeared to be on a Saturday afternoon, surrounded by hundreds of open-mouthed Dubliners.

Today, three decades later, I recognise Thom McGinty as something altogether different: the latest in a long line of legendary Dublin street characters. If there is a family resemblance, it is with figures such as Zozimus and Bang Bang. Another great Dublin character, Brendan Kennelly, captured his contribution when he said McGinty’s gift was “to mesmerise his audience… to lure them out of their busy selves and to take them away into that land of perfect stillness where marvellous dreams are as normal as Bewley’s sticky buns”.

I have only just learned that Thom McGinty wasn’t that Scottish at all. He had Irish parents, and spent childhood holidays in Wicklow. And his life was far more remarkable than I had assumed in my know-it-all teens. Over the last few months we have been putting the pieces together in preparation for a new exhibition in the Little Museum. It’s quite the story.

An unusually bright child, McGinty served as an altar boy and considered becoming a priest. Instead, he went to the University of Strathclyde to study accountancy. It was here he was introduced to mime. He was particularly influenced by the work of Lindsay Kemp. However, he dropped out of college, and in order to earn money he became an art school model. His first job was “hanging naked from a balcony in a crucifix position, balancing on my left toe”.

In 1976, with £40 in his pocket, McGinty arrived in Dublin. After failing to find enough work as a life model, he decided to dress up as a white-faced clown and went down to the Dandelion Market. There he sat very still and silent behind a sign: “In love with the country but unable to get employment, please give generously.” Benefactors were rewarded with a wink. It would later become his signature trait.

When the owner of The Diceman, a games shop, wanted someone to promote his business, McGinty took the job at weekends, but it soon turned into a more permanent gig, and a new nickname. In order to avoid arrest for loitering, McGinty began to glide almost imperceptibly along Grafton Street. This stately pace, with torso and head immobile, meant it could take him a couple of hours to cover just a few hundred yards.

After a few years the shop closed down, but The Diceman had found his métier by, and on, that stage. If you were looking for a human-sized ATM machine or a cup of tea, a daffodil or a tube of toothpaste, Cupid or Dracula or even the Sacred Heart, Thom McGinty was the man for the job.

He also did a bit of acting here in Dublin. I remember seeing him as the Executioner in Steven Berkoff’s fabled production of Salomé. But frankly, I still thought of him as a bit of a chancer. I mean, at least Glen Hansard could play the guitar. What was your man doing on the stage of The Gate?

When Thom McGinty died at the age of 42, his coffin was carried down Grafton Street at a stately pace

All the gay icon stuff came later. I didn’t see the famous 1994 interview on the Late Late Show, in which he talked about being HIV-positive, until a few weeks ago. It wasn’t clear to me that McGinty was heroic or even remotely valiant. I didn’t know that he had an influence on people I admire such as Gavin Friday and Panti Bliss. He was just that fellow on Grafton Street who used to come in for his supper. The other day, Mannix Flynn assured me that The Diceman used the Coffee Inn as his dressing room, but I don’t remember this, and I never really had more than a few words with him. All I can tell you is that he liked several spoons of sugar in his tea.

Apparently footfall is down on Grafton Street. Retailers are anxious. When Thom McGinty died at the age of 42, his coffin was carried down the street at a stately pace. Twenty-five years later, I realise that The Diceman was not just an obstacle on the way to work. He was a brave, exotic and much-loved presence on a street that was, and is, in want of colour.

It is, at last, a privilege to share his story.

Trevor White is director of the Little Museum of Dublin. The Diceman exhibition opens on February 21st and runs until May 24th. littlemuseum.ie