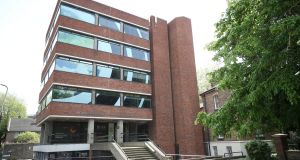 The Dublin Institute of Advanced Studies at 10 Burlington Road, above, and 24 St Stephen’s Green are two of the youngest buildings in Dublin to secure preservation status. Photograph: Nick Bradshaw

Two 1970s buildings, one of which required the demolition of a Regency house on St Stephen’s Green for its construction, have been added to Dublin city’s record of protected structures (RPS).

The buildings, at 24 St Stephen’s Green and 10 Burlington Road, are two of the youngest buildings in the city to secure preservation status, and are among very few post-second World War buildings to be listed on the record.

Docomomo, an organisation dedicated to the conservation of modern architecture, first proposed the listing of the buildings, and eight others, a decade ago. Two of the 10 have since been demolished before they were listed.

Shane O’Toole, an architectural critic and Docomomo founder, said the two early 1970s buildings were “outstanding examples” of their type and he was “absolutely delighted” they now had protected structure status.

Number 24 St Stephen’s Green, completed in 1973, was designed by Ronald Tallon of Michael Scott & Partners, for auctioneer Lisney. A three-storey Regency house had stood at number 24 but it was bought by Lisney in the late 1960s and demolished.

It was replaced by a six-storey over-basement reinforced concrete building, with a recessed ground floor and “curtain-wall” – a type of non-structural cladding – facade.

Dublin City Council’s conservation section described the building as an “elegantly proportioned, urban infill project” and “though modern in expression, the building responds to its historic context through the composition of the steel and glass facade which reflects the scale and proportions of the adjacent historic buildings”.

In his submission seeking the listing of the building, Mr O’Toole said it was a “small-scale exemplar of Miesian architecture”, and “one of the earliest buildings to demonstrate how cutting-edge modern architecture and the urban streetscape qualities of traditional cities can be reconciled”.

He said it was “arguably the most successful integrated modern intervention in Dublin’s Georgian core.” It won a European Architectural Heritage Award in 1975.

The Dublin Institute of Advanced Studies (DIAS), built in 1971 in the grounds of a 19th-century villa at 10 Burlington Road, was also an award-winning building in its day. It was designed by Sam Stephenson, who is perhaps better known as the architect of the former Central Bank building on Dame Street.

The DIAS building is described by the council as a “brick tower cluster, and an elevated brick and glass cube, both set at an angle to the existing villa”. It “references the nineteenth-century villas on Burlington Road, through its use of red brick, the sunken garden and stepped entrance”.

A well as the building being of architectural and technical interest, the council said, the institute is also of historical and cultural interest, with Austrian physicist Erwin Schrödinger serving as founding director of its school of theoretical physics.

No objections were lodged to the listing of the institute building. However, the owners of 24 St Stephen’s Green, New Ireland Assurance Limited, did object to its listing. The building was of “no special architectural interest” and little of the original interior fabric remained, it said.

“Within the impressive history of Irish architecture from the early eighteenth century to the early twenty-first century, architectural historians are widely in agreement that the decades between 1960 and 1990 represent a notable low point,” it said.

However, Mr O’Toole said in this particular case, the Tallon building was of a considerably higher calibre than the three-storey, early 1800s house it replaced.

“The Regency house was always an oddity in that location. It was out of scale for St Stephen’s Green, and wasn’t something that was part of a whole,” he said.

The years prior to the 20th century did not have a monopoly on worthwhile architecture, he said.