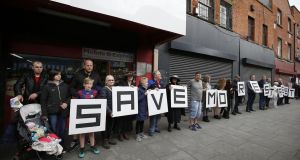 The Department of Culture and Heritage has said it is “not yet in a position” to set a date to start work on the 1916 commemorative centre on Moore Street, originally due to open in the Rising centenary year.

Dublin city councillors have said they are “extremely concerned” by the Government’s “complete failure” to progress the restoration of the national monument.

Hammerson, the UK property group that owns a six-acre site stretching from O’Connell Street to Moore Street, said it wanted to lodge a planning application with Dublin City Council this year for its “Dublin Central” development.

However, it is not known when the national monument buildings, which sit at the centre of the site on Moore Street, will be restored by the State.

Hammerson has the benefit of planning permission secured by previous owner Chartered Land for a €1.25 billion enclosed shopping complex on the site, but has decided to scrap this in favour of a mixed-use development that will restore the historic street pattern of the area.

The plan will include a new east-west pedestrian street between O’Connell Street and Moore Street, two new civic squares, shops, offices, apartments, a hotel and metro station. Central to the scheme is a “historical trail” to commemorate 1916 Rising events and locations through the site.

The Court of Appeal in 2018 overturned a declaration that buildings on and around Moore Street, part of the Hammerson site, constituted a national monument following a case taken by the State. However, State-owned buildings at 14-17 Moore Street remain national monuments and are due to be developed separately as a 1916 Rising commemorative centre.

The Department of Heritage said the legal proceedings taken against the State meant it had not been possible to open the centre in time for the Rising centenary.

“At the same time the buildings were occupied by protesters opposed to the State’s project,” the department said.

A recent report of the Government-appointed Moore Street Advisory Group said it was essential there were no further delays in “securing the fabric” of the national monument.

The group said it should be opened to the public so it can “insert itself into the public consciousness as soon as possible in this Decade of Centenaries”. Its current state “poorly reflects the presence and poignancy of the buildings in the events of Easter Week 1916”, the report said.

The department said Minister Josepha Madigan acknowledged there was an “urgent need to secure the fabric of the national monument” and was “anxious to progress the resumption of the refurbishment and presentation works”. However, the department said, “we are not as yet in a position to say when the project will get under way again”.

“The derelict look has completely destroyed footfall in the area and as a result put huge pressure on remaining business tenants who hugely invested in their units and hold long-term leases ,” Stephen Troy, a Moore Street butcher and a member of the Dublin 1 Business Alliance, said.

The buildings on Moore Street owned by Hammerson were also in a poor condition, Mr Troy said. “The vulnerable, short-term tenants occupying Hammerson’s units are afraid to invest in their units due to the fear of being expelled at the end of their short-term monthly contracts, contributing to the undesirable look that the iconic Moore Street terraces now possess,” he said.

Fianna Fáil councillor Mary Fitzpatrick, who chairs the Lord Mayor’s Forum on Moore Street, said the “prolonged failure” to develop the national monument was “causing businesses to fail”. Local councillors supported her motion calling on the Government to “immediately release funds and commerce work” to restore the buildings.