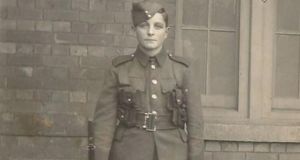 Micheál Martin’s spidery writing is all over the printout of an email sent to him by his cousin outlining his family connections.

Like many extended Irish families, his has a nexus of connections that have to be written down to make sense.

His mother’s family, the Corbetts, were out-and-out Republicans. His maternal grandfather was an old IRA man who was involved in the Knocklong ambush of 1919. His maternal grandmother was a mental health nurse who admitted on-the-run IRA men to the hospital she ran and then let them escape over the back wall.

So far, so Fianna Fáil. But it is his father’s side of the family that demonstrates how complicated and contradictory Irish family history can be.

Mr Martin’s paternal grandfather, John Martin, served in the British army in the first World War. He joined the Leinster Regiment in January 1915. He also served in the Durham Light Infantry and Royal Munster Fusiliers, though curiously he does not appear to have served overseas.

He married a war widow, Mary Kate Costello (née O’Leary), whose husband Joseph Costello was killed in action in France. She is Mr Martin’s grandmother.

The Fianna Fáil leader said his father and younger siblings lived in fear of the “cruelty man” and could well have ended up in an industrial school but for Maura. “She’s the real hero in all of this. She kept it together.”

Paddy Martin had a vivid memory of being sent to a priest by his mother to arrange the funeral service when his father died. “The priest asked for money. They didn’t have money. They were very poor. That kind of stung him. It was a hurtful memory,” Micheál Martin recalls.

The two oldest boys, Philip and Jackie, went to Britain and followed in the family tradition by joining the British army. They sent money back to Maura.

Philip Martin was serving with the Royal Engineers during the fall of Singapore to the Japanese in 1942. Winston Churchill described the fall as the “worst disaster” and “largest capitulation” in British military history – and this from a man who planned the disastrous Gallipoli campaign of 1915.

The Japanese were brutal captors, believing that those who surrendered had dishonoured their countries and were not worth treating with dignity.

Philip Martin was given up for dead by his family. They heard nothing from him until the war ended and his name appeared in newspaper reports of released POWs.

By an extraordinary coincidence, Maurahad married a British soldier from Cork called Mossie Sheehan. Sheehan was involved in the liberation of Changi. He arrived two hours after his brother-in-law had left. Later, Philip Martin sent a telegram home to his sister Maura confirming he was still alive. One can only imagine the relief.

Philip Martin was taken to Sri Lanka for recuperation. He was 6ft tall but weighed just eight stone on his release. “He thought he had a month left in him,” says Micheál Martin.

Like many British POWs, Philip Martin had witnessed unspeakable cruelties. The men were reduced to eating rats, spiders and raw chickens to supplement their meagre diet. At one stage he witnessed the Japanese forcing a woman to eat half-boiled rice which exploded in her stomach. She was beaten to death.

Philip Martin transmitted his hatred of the Japanese to his younger brother, Paddy.

“When the queen attended Hirohito’s funeral (in 1989) he got angry about that. My Dad would not normally be interested in what the queen of England might do. He said to me that Philip would turn in his grave. I found that strange coming from my father,” Micheál Martin says. “Dad was very proud of Philly. The fact that he did three years with the Japanese was very tough going, but he hardly mentioned his own father’s involvement in the (first World) war.”

Jackie Martin also joined the British army and served in India during the war. He was a half-brother as his father, Joe Costello, Micheál Martin’s grandmother Mary Kate’s first husband, was killed when Jackie was only in the womb.

He would appear not to have seen active service. “Jackie was a bit of a tall-tale merchant,” said Micheál Martin, smiling at the memories. “He told me his task was to map-read people out of trouble so he would walk around in circles to stay away from the natives and try to get by the war.”

Philip Martin stayed in the British army after the war and became a football coach. In the years of national service, which lasted until 1961 in Britain, the armed services were a fertile recruitment ground for the Football League. Among those he coached was the former Tottenham Hotspur and Scotland star Dave Mackay, a player commonly acknowledged as one of the best of his era.

There was a time when a Fianna Fáil leader would be circumspect about his family’s involvement in the British army, but that time has passed.

Before he became a politician Mr Martin studied history to MA level. His thesis was on Cork after the first World War.

“In the aftermath of any military war of independence, history gets partisan, stereotyped or simplistic,” he says.

“What you discover is that there are overlapping strands. Families are not all one way. A brother could join the British army. Another brother could be in the IRA at the time. It is much more complex than we make it out to be in our histories and our assessments.”

Mr Martin has attended Remembrance Sunday services in recent years, including the one marking the 100th anniversary of the first World War at St Patrick’s Cathedral in November.

“We need to be self-confident in commemoration and remembering. It was a terrible war; looking back, the loss is still one that strikes me as staggering,” he said.

He believes those who participated in the cataclysmic struggles a century ago were more tolerant of the choices made by their contemporaries than subsequent generations became.

“The revolutionary generation were more self-confident because they had done the business. People who do the business don’t have to boast about it. My father, who was a boxer, said that if you were in a fight you wouldn’t want to be in another one.”