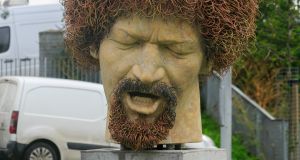 Dublin City Council said it was “serious consideration will be given in light of the most recent attack to alternative ways of protecting this important work. Removal temporarily or permanently or finding an alternative site cannot be ruled out” due to the ongoing vandalism. Photograph: Gareth Chaney/Collins

Gardaí investigating criminal damage to the Luke Kelly sculpture in Dublin’s north docks have arrested and charged a man, aged in his 40s.

The man was arrested on Monday and detained under Section 4 of the Criminal Justice Act 1984 at Store Street Garda Station.

He has since been charged in relation to the incident and is due to appear in court at 10:30am on Tuesday.

Meanwhile CCTV cameras are to be installed at the sculpture following repeated vandalism of the art work.

The sculpture, a 2m high marble representation of Kelly’s head, was daubed with paint at the weekend. It is the seventh time the statue has been vandalised since it was installed in January of last year.

The work, by artist Vera Klute, sits at the corner of Guild Street and Sheriff Street at the mouth of the Royal Canal, close to the musician’s childhood home, and Dublin City council said school children undertake “little cleans of his hair” which is made from coper wire and is prone to catching litter and leaves on windy days.

The council said it was aware there was “high regard for the art work locally” but said “ serious consideration will be given in light of the most recent attack to alternative ways of protecting this important work. Removal temporarily or permanently or finding an alternative site cannot be ruled out” due to the ongoing vandalism.

The North Wall Community Association has said it was “frustrating” but “not unexpected” that the statue had been defaced with graffiti again. The group said the sculpture should “not be moved but protected” and said it had called for the plinth that sits underneath the sculpture to be raised. The association has also requested the installation of a “5ft black spiked railing” around the statue.

The council said it was “aware that prosecutions for previous vandalism of this work are in train”. In advance of any decision to move the statute it said it would install CCTV “on or before Thursday of this week”.