From the archive: The destruction of Irish country houses, or Big Houses, between 1919 and 1923 saw about 275 houses destroyed 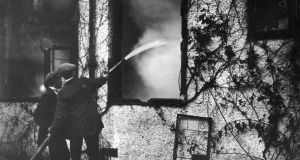 Firemen hosing down the ruins of Kilteragh, Sir Horace Plunkett’s house outside Dublin, which was burned down by forces opposed to the Anglo-Irish Treaty during the Irish Civil War, February 1923. Photograph: Walshe/Topical Press Agency/Hulton Archive/Getty Images

“The day was beautifully fine, and the ground in excellent condition.” So went a report in The Irish Times on March 24th, 1869, detailing the idyllic conditions for the South Mayo hunt, which included Master Moore of Moore Hall.

George Henry Moore, a member of parliament for Mayo, died the following year, April 1870. At the time, sympathies regarding his death were expressed in the letters page of The Irish Times, addressed to his wife. “Nothing that we could say in this communication could sufficiently convey how passionately we admired his transcendent abilities, or his inviolable fidelity to the faith, the people, and the cause of Ireland,” one letter read from the Central Council and Catholic young Men’s Societies of Liverpool.

“If a nation’s grief can soothe mortal affliction within that circle where it wounds most, the mourning which the unwelcome tidings of Mr Moore’s death poured into the hearts of his countrymen, as well as their fervent prayers that his loss may be heaven’s gain, will we hope, bring you strength and consolation.”

The clergyman, Patrick Lavelle, wrote to The Irish Times on behalf of Moore’s wife, Mary Blake, to thank those sympathising with her about her husband’s death.

Moore imported grain and flour during the Famine, bought cattle for his tenants, and gave them land to graze. Unlike many landlords, he didn’t evict any tenants, and despite Mayo being one of the most adversely affected areas in the Famine, none of Moore’s tenants starved. Moore notably used his massive victory in the Chester Cup steeplechase to fund food and livestock for his tenants at the time.

But the following decades would see such sympathy towards landlords change drastically. Moore’s son, George Moore the writer, supported the Anglo-Irish Treaty, a position that would lead to the destruction of the family’s home.

On page five of The Irish Times on Saturday, February 10th, 1923, a series of photographs ran under the headline “Irish Mansions Mined and Burned”. The main photograph showed Lord Mayo’s home – Palmerstown House in Kildare – in ruins. Reports from the night it was burned said men from the Irish Republican Army knocked on the servants’ quarters door and announced they were burning the house in reprisal for the execution of men at the Curragh. They gave servants 15 minutes to remove their belongings, and Lord Mayo time to save some paintings, then soaked the rooms in petrol, and set the house alight.

The newspaper also featured a photography of Horace Plunkett’s burned out house in Foxrock, Co Dublin. A photograph of Plunkett ran with the caption, “Sir Horace Plunkett, who, when told that his house had been destroyed, replied: ‘It is not so sad as if it had been a poor man’s one-roomed house.’” A photograph of the Earl of Mayo had the caption, “Earl of Mayo, who, when asked whether he intended to change his place of residence, replied: ‘No, I will not be driven from my own country.’”

Also pictured was Moore Hall, burned in February 1923. The single newspaper page depicts a country in chaos, not least the chaos of contradictions. There was a printed IRA proclamation signed by Liam Lynch declaring, “we hereby give notice that we shall not give up our hostages, and if the threatened action be taken we hold every member of the said Junta and its so-called parliament, senate, and other house, and all of their executives, responsible, and shall certainly visit them with the punishment they shall deserve.”

Below that, there was a cheery portrait of players in the ladies’ doubles handicap badminton matches held in Ballsbridge, Dublin, along with news of Ailne Phillips, a young Irish ballet choreographer making waves in England. Next to that, was the news that Dr George Sigerson had resigned from the Free State Senate following a threat to burn his house on Merrion Square. “I have not been afraid of the threat of shooting,” Sigerson said. “I attended the Senate day after day, taking the same risk as my colleagues, but if I continue to act my house is to be burned.”

On June 3rd, 1924, a report on compensation for the burnings announced that George Moore was awarded £6,600 for the destruction of Moore Hall. A report the previous month showed a breakdown of the request for compensation across furniture, china, engravings, and books. One of the most pronounced losses in the house was its library, which included extremely rare and valuable manuscripts and books. The destruction of Irish country houses, or Big Houses, between 1919 and 1923 saw about 75 houses destroyed.