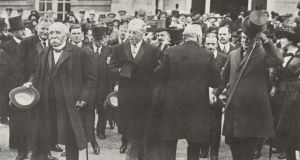 In the British general election campaign of December 1918 slogans such as “Hang the Kaiser”, “squeeze the lemon till the pips squeak”, “homes fit for heroes”, showed clearly the priorities of the British electorate. Parties favouring the continuance of the wartime coalition won 523 seats but it was a coalition in name only since the Conservatives won 382 of those seats, the pro-coalition Liberals dropped to 127, with 14 other seats to minor parties.

“A great pity,” wrote the king. He had been against an immediate election, thinking that prime minister David Lloyd George was trying to cash in on the Armistice. Lloyd George himself was pessimistic about the election, wishing he had not embarked on it. He was vindicated by the sweeping victory.

An onslaught of problems faced the new government. The war had ended but Allied forces were involved in the Russian civil war and it was going badly. Interestingly, many British politicians had already drawn analogies between Sinn Féin and the Bolsheviks.

Domestically, there was industrial violence on the Clyde and in Belfast, a police strike in Liverpool, an underground strike in London, fear of unemployment and the demobilisation of the huge wartime army. Then there were the peace negotiations. Lloyd George was in Paris for most of 1919. The Conservative leader and pre-war scourge of home rule, Andrew Bonar Law, was in charge of the government at home. Small wonder that at the time the Sinn Féin victory barely registered in the collective consciousness of the British cabinet.

Lloyd George had opposed home rule in 1886 and he was a supporter of Joseph Chamberlain, who had left the Liberal party because of it. Flashes of anti-Catholic prejudice were evident in Lloyd George’s reactions in 1916 after the failure of his home rule negotiations and over conscription in spring 1918. His imperial consciousness had been heightened by the war, he was not pushed into a hardline attitude by his Conservative coalition colleagues.

Lloyd George made a petulant comment to Edward Carson, just before the election, that while he was prepared to bring in home rule, “he did not mean the Irish to have it till they deserved it”, which was tantamount to never.

He was determined there would be no coercion of Ulster. But time was not on the British side because of the deadline of the peace treaty. Once the treaty with Germany was signed, the Home Rule Act, suspended in 1914, would automatically come into force.

Joseph Chamberlain’s son Austen, who was appointed chancellor of the exchequer after the election, long favoured a devolution solution as he did not believe that the imperial parliament could deal with Ireland on its own, especially in a post-war world seething with revolutionary ferment. If devolution was not introduced, he warned, “we shall be in grave danger of revolution before many years had passed”.

Britain gained huge new imperial possessions because of the war, but the number of imperial trouble spots also accelerated; for example, the Amritsar massacre occurred in April 1919. For the next three years the gloomy quartet of Ireland, Egypt, India and Mesopotamia (Iraq) made regular appearances on the British cabinet’s agenda. Ministers and officials saw unwelcome parallels between De Valera, Collins, Gandhi and Zaghlul, the Egyptian nationalist leader. There was a persistent fear of a domino effect between each imperial theatre.

For the various unionist communities – the Ulster Unionists, the southern unionists and the often-forgotten English unionists – the 1918 elections reinforced the divisions that had become increasingly stark. Ulster Unionists were focusing on partition based on six-county exclusion.

The Irish Unionist Alliance, which represented southern unionism, had split in early 1918, with Lord Midleton and his supporters reluctantly accepting home rule while others argued that the legislative union with Great Britain was “the only hope for the future of our country”.

The wounds to the southern unionist psyche went deep. Gen Hubert Gough, who had been at the centre of the Curragh mutiny in 1914 and later commanded the Fifth Army during the war, was thinking of standing for a Belfast constituency in 1918, but told Carson why he would not: “I told him how the war had changed my views on many things, including Ireland.” Carson said that a lot of water had passed under London Bridge since the Curragh, to which Gough replied “Yes, and a lot of blood too”.

The career of Walter Long is particularly interesting in unionist history. Between 1918 and 1920 he chaired the cabinet’s Irish committee as the Government of Ireland Bill enshrining partition went through parliament. A Tory squire from Wiltshire, he was a prominent defender of southern unionism. He was Irish chief secretary in 1905. His mother was a Hume of Humewood in Co Wicklow, and his wife was the daughter of the earl of Cork.

“I know Ireland,” he would frequently tell cabinet colleagues, who listened respectfully as few of them had ever visited the country (Lloyd George hadn’t been there since 1907).

The problem was that while Long certainly knew unionist Ireland, his knowledge of nationalist Ireland was tenuous. “Firm, firm, firm,” should be the British response to Sinn Féin in his view. Dominion Home Rule was starting to emerge as a solution but Long dismissed it as “blather”.

In one sense the results of the 1918 election had been predicted since 1916 so were hardly a surprise. But the British government knew very little about the new Sinn Féin and assumed it was just another eruption of Irish malcontents like the Fenians and the Land War; well, they had been dealt with and so would these latest agitators. But the young men and women of this Sinn Féin were young, determined and not afraid of British power.

They weren’t interested in devolution nor in any variety of home rule. The First Dáil met just three weeks after the election results and its proceedings prompted The Irish Times to condemn them as “a solemn act of defiance of the British empire by a body of young men who have not the slightest idea of that empire’s power and resources”. More thoughtful observers wondered.