Is there an onus on us as members of this society to keep our old stories alive? 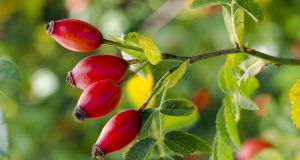 Johnny Magory is actually slang for the wild rosehip, from the Irish mogóir, a hip. Photograph: iStock

“Can I’ll tell you a story about Johnny Magory?” is the beginning of a children’s rhyme, that many will know continues as: “Will I begin it? That’s all that’s in it.” But, what we’ve forgotten is that Johnny Magory is actually slang for the wild rosehip, from the Irish mogóir, a hip. And, there’s a lot more “in it” than just that.

These bright crimson berries strewn through the hedgerows each autumn contain more Vitamin C than any other fruit or vegetable known to man. While an orange contains a mere 53mg of Vitamin C per 100 gr, rosehips can have up to 2500 mg per 100g. Basically, it’s a superfood beyond one’s wildest imaginings – just hanging there on the roadside, ignored by all.

What should one do with a fact like this? Or the fact that tsunamis in Asia can cause the ancient wells in Ireland to rise, or that early Gaelic society had professional farters whose role and status were specifically allotted under legal code? These are parts of our heritage and culture, but in an increasingly online world of TikTok videos and Twitter threads it’s hard to know where they fit.

A governmental framework document issued in January stated that: “Every citizen should have the opportunity to participate in the cultural life of the community and enjoy our cultural heritage.” And it’s true that we should have some way of learning that oak trees can act as oracles of arcane information, or that Cú Chulainn may actually have been an interstellar comet.

Ideally, there’d be a subject in school devoted to passing along the myriad wisdom contained within the oral tradition that we no longer tell our children; the insights into history, culture, cures and our understanding of the natural and spirit worlds. But it’s unlikely to happen.

Yet, these things are important. It’s hard to define precisely the impact it had on me to learn that there are two brothers living near Gartan in Co Donegal who are the custodians of a secret vein of sacred mud that was imbued with magical powers by Colmcille’s mother and then hidden beneath the soil on the bank of a river. T

he two brothers are direct descendants of Colmcille’s brother, which can be proven through genealogy. (I’m not going to name them as already too many visitors come to them.)

The mud received its powers of protection and healing in December 521AD when Colmcille’s mother, Eithne Macfeargus, was about to go into labour and as her waters broke she spilled some blood on the ground. Her kinsmen wished to hide the stain, but she instructed them that only her direct descendants would be able to find it again, and so it has proved. Colmcille’s brother, Brénainn, sired the Friel lineage who have kept the whereabouts of the mud and the knowledge of how to process it to ensure its full potency alive ever since.

This fact is important somehow. It made me feel more rooted to the culture of this land. Is there an onus on us as members of this society to keep it alive? Should we try to remember that there’s a type of canvas currach in North Mayo that can hold a 2 tonne load?

Or that a secretive band of stone masons have left cryptic symbols and ghoulish images hidden in plain sight by in the walls of rural Ireland? Or that Irish newts have such strong homing instincts that they post themselves through the letterboxes of homes in suburban Dublin?

Maybe, all this should all be left in the past, but it’s hard to do so. I’ve spent the last year enduring countless nettle stings to test a cure given to me by a Traveller at the Marian shrine in Knock. I stuck my head into a giant puffball mushroom to test if the spores induce hallucinations, and burrowed 40 metres underground to spend a night without a torch in a limestone cavern in Roscommon that is believed to have been used as a chamber of transformation for Irish mythic heroes.

Just before lockdown I went in search of the last remaining fibres of a 3,000 year-old oak road that is being milled into compost by a garden supplies company and I consulted with a geologist on the constituent elements of the water in more than 200 holy wells in Ireland, and researched the theory that our ancestors may have forsaken our Celtic gods in favour of Christianity because of some truly awful weather.

The results are in a new RTÉ Radio series titled The Almanac of Ireland that explores the quirks, conundrums and wonders of Ireland’s heritage. If you want to know whether metrological mirages from the Arctic may have propelled Irish monks to head off in search of Greenland, or if Irish dampness may have killed Cromwell, and numerous other irrelevant rumours and random bits of lore, check it out.