Greatly outnumbered by the crown forces when it came to firepower, the IRA was forced to capture, steal and smuggle weapons 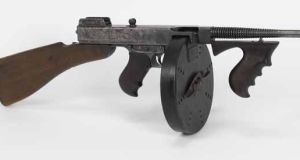 A Thompson submachine gun: The IRA were the first customers for the gun, designed in 1919 by Gen John T Thompson.

During 1920, the IRA developed its tactics as the war progressed, attacking RIC barracks and towards the end of the year creating flying columns and active service units. However, both academic studies and the stories of the veterans admit to a lack of weapons and to the generally poor state of weapons held by the IRA.

Historian JP Duggan has argued that “without standard weaponry, collective training and concentration of force it was unlikely that guerrilla warfare, no matter how skilfully waged, could achieve military victory in the field”. Therefore, the IRA used what were available: shotguns, pistols and, when they obtained, them rifles. They did not have machine guns or artillery and were greatly outnumbered by the crown forces when it came to firepower. Naturally, as an island, the best way to obtain rifles and pistols was from the British army and RIC, either by capturing, stealing or, in some cases, purchasing them.

However, smuggling of weapons from the United States and Europe did happen, despite the ports being controlled by crown forces. During the War of Independence, Dublin port staff and dockers helped smuggle weapons from Liverpool – however, by the time of the truce in July 1921, they had only helped to smuggle in 289 handguns, 53 rifles, 24,141 rounds of ammunition, and 1,067 pounds of explosive.

Not enough to win the war against the crown forces, which was 60,000-strong in 1920, with each policeman and soldier well-equipped with modern weapons. The most famous smuggled weapon into Dublin was the Thompson submachine gun, which could have been a game-changer. The IRA were the first customers for the gun, designed in 1919 by Gen John T Thompson.

The first three submachine guns arrived in Dublin in May 1921 and were test-fired by Tom Barry at a demonstration on May 24th attended by Michael Collins, Richard Mulcahy and Gearóid O’Sullivan. The new weapon was believed to be ideal for guerrilla warfare as it fired a very powerful round rapidly and could be easily concealed, as the stock could be removed.

The IRA was also the first to use the machine gun in combat, when a group led by Oscar Traynor, later a minister for defence in the 1940s, fired them at a train near Drumcondra, wounding three soldiers. The original order was for 653 machine guns and they were to be sent to Ireland in June 1921. US customs, however, impounded 495 of the guns on the docks in New York, and the remaining 158 were eventually smuggled to Ireland, mainly after the truce.

While the story of the importation of guns makes exciting reading, the reality, as the historian Peter Hart observe: “Shotguns killed far more people in this period than submachine guns ever did and even rifles often took second place to pistols and revolvers.”

It was a close-quarter war, where IRA volunteers had to get very close to use their limited arsenal of weapons.