First WWI Victoria Cross winner to get memorial in Glasnevin

Ronan McGreevey travelled to Mons in Belguim, to visit several key battle scenes that Irish soliders had an impact on. Video: Ronan McGreevey 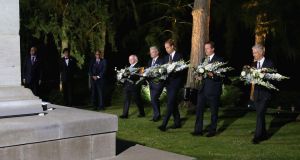 A memorial paving stone to Lieutenant Maurice Dease, the first winner of the Victoria Cross (VC) during the First World War, will be unveiled at Glasnevin Cemetery tomorrow evening.

This coincides with the 100th anniversary of the Battle of Mons which took place on August 23rd, 1914.

Lieutenant Dease (24), who was originally from Coole, Co Westmeath, was posthumously awarded the Victoria Cross because he remained at his machine gun post even after being critically injured during an assault on Nimy Bridge outside Mons.

Lieutenant Dease died of his wounds and is buried in St Symphorien cemetery which President Michael D. Higgins visited earlier this month as part of commemoration services to mark the start of the first World War.

The paving stones are an initiative by the British government to honour all the 627 British soldiers who won Victoria Crosses during the war. Originally they were intended for only those who are born in what is now the UK, but the British Government revised the scheme.

Each of the 27 Victoria Cross winners from what is now the Republic will get a paving stone paid for by the Commonwealth War Graves Commission (CWGC). It has not yet been decided where they will be permanently located.

The event will be attended by the Minister for Arts, Heritage and the Gaeltacht Heather Humphreys and the UK communities minister Lord Ahmad who is leading Britain’s commemorations programme.

Lord Ahmad said it was a “tremendous honour” to be able to pay tribute to the courage of Maurice Dease.

“Over the next four years we will pause and remember the sacrifice that was made throughout Ireland and the commemorative stones will ensure that there is a permanent memorial to all these brave men,” he said.

Glasnevin Trust chairman John Greene said the cemetery had decided to host the event to facilitate greater understanding of that period of Irish history.

“We’re trying to get people to look at this period of history and understand it themselves. We’re not in the business of what is right and wrong. They more they look at it, the more complicated it looks. These were extraordinary men of extraordinary bravery. They deserve to be commemorated.”

Mr Greene said the Deases, who were an Anglo-Norman family who settled in Ireland in the 1200s yet remained Catholic, were a “microcosm of Ireland over a long period”.